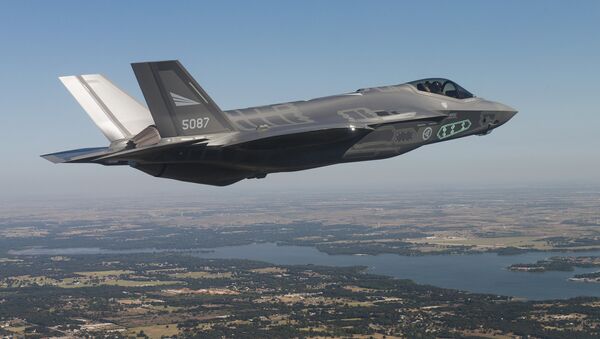 © Flickr / Forsvarsdepartementet
Subscribe
International
India
Africa
Over a week has passed since Denmark's government opted to replace the country's aging air force planes with F-35 fighter jets, but passions are still seething. The government selected the most advanced, expensive fighter, and Denmark will be unable to meet its international obligations for some time as a result.

Flying a Kite: Epic F-35 Deal Leaves Denmark Vulnerable and Penniless
As the F-35 will only be fully developed in 2018, there will be a gap of three years, during which Denmark will be unable to execute its international duties, Defense Minister Peter Christensen acknowledged to the newspaper Fyens Stiftstidende. The new aircraft will only be "fully operational" in 2027, and thus Denmark be unable to play a direct role in international conflicts between 2022 and 2024, should NATO or the US ask for help.

When conservative politicians realized that Denmark will have to suspend its military plans in order to purchase new fighter jets, their irritation became obvious to the naked eye.

Defense Minister Peter Christensen described the situation as "unfortunate," while conservative Rasmus Jarlov, who earlier touted the new fighter jets as a remedy against "aggressive" Russia, found it "incomprehensible." Even Marie Krarup of the Danish People's Party said the situation was "problematic."

High Anxiety: Denmark's Choice of Air Force Update Triggers Debate
The once peaceful Kingdom of Denmark has recently become a belligerent nation which has played a military role in Afghanistan, Syria, Iraq and other parts of the world. The current trend in both Danish and international foreign policy is that any major problem automatically has a military solution, argued columnist Michael Jarlner of the newspaper Politiken.

"When terrorist attacks occur in Europe, we bomb the Islamic State [Daesh] in the Middle East. When the refugees become too numerous, NATO warships appear in the Mediterranean. When the Russians change borders and increase their territory, we primarily think of the fighters and other military responses," he wrote, questioning bellicose responses to international affairs.

Winged Secrecy: Warplanes Undermining Danish Democracy
In addition to safety issues, the problem of financing the precious war-toys remains, with Denmark being increasingly pressed for funds amid the ongoing financial crisis and the looming challenges which face the country's welfare system.

"It costs a small farm to send a fighter on the wings, and the F-35 rips the gold out of the treasury faster than the speed of sound when it is in the air," the tabloid Extra Bladet argued.

According to the newspaper, the F-35 is almost twice as pricey as its competitors, the F/A-18 Super Hornet and Eurofighter Typhoon, which were rejected by Prime Minister Lars Løkke Rasmussen and his government.

Make Love, Not War: Danes Against Buying More Warplanes
Every hour the F-35 is in the air is going to cost Denmark's state coffers around 202,000 kroner (some 30,000 dollars), compared to 112,000 kroner for the F/A-18 Super Hornet (17,000 dollars) and 122,000 kroner (18,500 dollars) for the Eurofighter Typhoon, Extra Bladet stated, citing reports from the Pentagon and military analysis institute IHS Jane's.

Last but not least, complaints have been filed regarding the noise level, as the F-35 has proved to be substantially louder in use than its forerunner the F-16, which Denmark has used since the early 1980s.

"It is a serious increase in the noise level. Ten decibels corresponds to a doubling of loudness," expert Birger Plovsing of the Delta Acoustics company told Ekstra Bladet.

Denmark releases summary of why they selected the #F35: https://t.co/TyzujLRhqP pic.twitter.com/UkZJgaK6vW