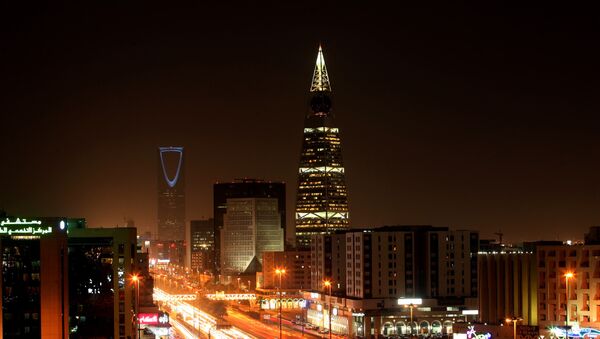 © AFP 2021 / HASSAN AMMAR
Subscribe
The US Treasury Department has exposed Saudi Arabia's total US debt holdings for the first time in 40 years, allowing analysts to answer the crucial question of whether or not Riyadh can carry out its threat to undermine America's economy.

A month ago, Saudi Arabia's Foreign Minister Adel Al-Jubeir threatened Washington, saying his country would sell off up to $750 billion in US Treasures and other assets, undermining the US economy, if a bill allowing families of 9/11 victims to sue the Saudis in a US Court passed in Congress.

Al-Jubeir's statement has prompted a lively debate on whether Saudi Arabia could really deal a heavy blow to the US dollar, or if its claims are nothing more than an idle threat.

"Should we [the US] worry about Saudi retaliation?" Chris Matthews of Fortune.com asked in an article that was published on April 19.

US Treasury Reveals Saudi Arabia Holds $116Bln in US Debt
Matthews expressed his doubts regarding Riyadh's ability to trigger an American debt crisis and suggested that "of the $750 billion in American assets that the Saudis claim to own, less than half of that appears to come in the form of US Treasury debt."

Although the US has been releasing data on foreign ownership of Treasuries on a regular basis since 1974, in accordance with a special agreement concluded between Riyadh and Washington following the Gulf nations' oil embargo of 1973, the amount the Saudis had in US Treasuries remained a closely-guarded secret.

But it's no secret anymore.

"The Treasury Department released a breakdown of Saudi Arabia's holdings of US debt, after keeping the figures secret for more than four decades. The stockpile of the world's biggest oil exporter stood at $116.8 billion as of March, down almost 6 percent from a record in January, according to data the Treasury disclosed Monday in response to a Freedom-of-Information Act request submitted by Bloomberg News," Bloomberg reported Monday.

'The New Normal': Why US-Saudi Geopolitical 'Honeymoon' Ended
First of all, it means that "the [Gulf] monarchy, while an important player in the US financial system, doesn't have as much leverage [against Washington] as many likely believed," Martin Matishak of the Fiscal Times points out; he also notes that "the disclosure comes during an unusually tense time in US-Saudi relations."

"The No. 1 oil-producing nation on earth owns just the 13th-highest amount of Treasuries — far behind China's $1.24 trillion, Japan's $1.14 trillion and even the Cayman Islands' $265 billion, as of March 31, making "any impact of a threatened sell-off negligible," he writes. He added that even if the Saudis dump all of their US debt, "it would probably hurt them more than it would affect the US financial system."

Secondly, the exposure has become yet another signal that the US-Saudi relations have continued to deteriorate. The geopolitical honeymoon is obviously over and Riyadh is no longer a "special" ally for the US.

Apparently therefore, evidence over Riyadh's possible involvement in the 9/11 tragedy continues to mount.

"There was an awful lot of participation by Saudi individuals in supporting the hijackers, and some of those people worked in the Saudi government," former Republican member of the 9/11 Commission John Lehman said in an official statement.

Money Has No Smell: How US Dollar Found Itself Backed by Drug Cartels
Furthermore, according to US Senator Bob Graham, the 80,000 or so classified documents hidden by the FBI from the congressional terror investigation could shed even more light on the House of Saud's connections to 9/11 hijackers than the infamous 28-page 9/11 Commission report.

Thirdly, the disclosure made by the US Treasury Department is yet another argument in favor of those who urge the US leadership to make the much-discussed 28 pages public.

000000
Popular comments
Only the Saudis know how many US treasuries they have. They, like others, often buy through proxies in places like Belgium to hide their purchases.
Neilo
17 May 2016, 18:40 GMT7
000000
Erik Trete, However, China and Russia are hoovering up the gold, using their $USD reserves and so many nations are turning away from trading in the $USD. I wonder for how much longer the printers are going to be working?
anne00marie
17 May 2016, 19:21 GMT5
000000
Newsfeed
0
New firstOld first
loader
LIVE
Заголовок открываемого материала
Access to the chat has been blocked for violating the rules . You will be able to participate again through:∞. If you do not agree with the blocking, please use the feedback form
The discussion is closed. You can participate in the discussion within 24 hours after the publication of the article.
To participate in the discussion
log in or register
loader
Chats
Заголовок открываемого материала
Worldwide
InternationalEnglishEnglishMundoEspañolSpanish
Europe
DeutschlandDeutschGermanFranceFrançaisFrenchΕλλάδαΕλληνικάGreekItaliaItalianoItalianČeská republikaČeštinaCzechPolskaPolskiPolishСрбиjаСрпскиSerbianLatvijaLatviešuLatvianLietuvaLietuviųLithuanianMoldovaMoldoveneascăMoldavianБеларусьБеларускiBelarusian
Transcaucasia
ԱրմենիաՀայերենArmenianАҧсныАҧсышәалаAbkhazХуссар ИрыстонИронауОssetianსაქართველოქართულიGeorgianAzərbaycanАzərbaycancaAzerbaijani
Middle East
Sputnik عربيArabicArabicTürkiyeTürkçeTurkishSputnik ایرانPersianPersianSputnik افغانستانDariDari
Central Asia
ҚазақстанҚазақ тіліKazakhКыргызстанКыргызчаKyrgyzOʻzbekistonЎзбекчаUzbekТоҷикистонТоҷикӣTajik
East & Southeast Asia
Việt NamTiếng ViệtVietnamese日本日本語Japanese俄罗斯卫星通讯社中文（简体）Chinese (simplified)俄罗斯卫星通讯社中文（繁体）Chinese (traditional)
South America
BrasilPortuguêsPortuguese
NewsfeedBreaking
17:01 GMT'Would Fire it Onto Ceiling': Prince Philip's Mustard Jokes Landed Him in Trouble With Queen
16:59 GMTREC Group Support for Kamaz Export Projects to Exceed 20 Billion Rubles
16:53 GMTThe Cypriot Caveat: Why Erdogan Shouldn't Call Russia Out on Crimea?
16:43 GMTPoland's PGNiG Says Received Right to Take Part in Certification of Nord Stream 2 Operator
16:39 GMTSotheby’s Puts Frida Kahlo’s Rare 1940 Self-Portrait Up for Auction
16:37 GMTFlash on Jupiter Possibly Caused by 'Alien Bomb,' Blogger Says
16:30 GMTIt's Massage Time: Bulldog Scratches Buddy's Back
16:29 GMTLNA Commander Haftar Instructs Col. Gen. al-Nazuri to Act LNA Head for Next 3 Months
16:20 GMTFrance to Return Ambassador to Washington Next Week After Macron-Biden Phone Call on AUKUS Spat
16:17 GMTWatch Haitian Deportees Throw Shoes at US Officials, Try to Storm Plane in Port-au-Prince
16:07 GMTPorn Actors' Trade Organisation Shakes Hands With Lobbying Firm to Get Protection From Congress
15:58 GMTEinstein’s 'Most Valuable Manuscript Ever' on Theory of Relativity May Fetch up to $4 Mlm at Auction
15:36 GMTUK TV, Radio Could Get Into Trouble for Using Terms "Karen", "Snowflake" & "Gammon"
15:33 GMTNATO Partners Agree to Revise Alliance's Concept, French Defence Minister Says
15:23 GMTBiden Says US Launching Vaccine Partnership With EU to Expand Global Vaccination
15:22 GMTBiden Hosts Virtual Summit on COVID-19 Pandemic
15:20 GMTGravitational Waves or Cosmic Rays? Strange Signals Reportedly Picked Up by 'Tabletop Detector'
15:02 GMTUnited Nations General Assembly 76th Session: Day Two
14:43 GMTMoscow: Washington Manipulates Visas to Put Pressure on Other Countries
14:28 GMTReverse Psychology: Fake Funeral Home in US Promotes Vaccine Shots