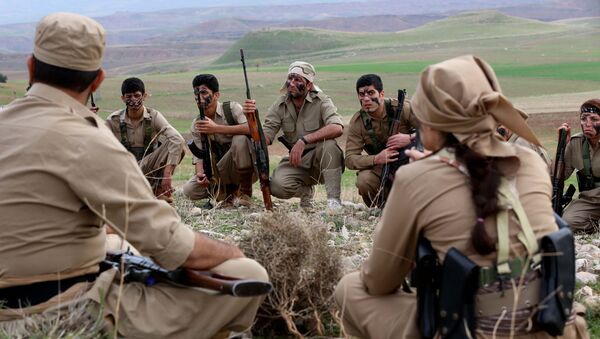 © AFP 2023 / SAFIN HAMED
Subscribe
International
India
Africa
A deal between Kurdish political parties in the Kurdish Regional Government may signal a shift in the region’s relations with Ankara and Tehran, the US-based intelligence analysis company Stratfor said on Tuesday.

A Friend in Need: Iran Sending Hundred Military Advisors to Syria and Iraq
WASHINGTON (Sputnik) – On Monday, a Patriotic Union of Kurdistan (PUK) leader announced that the party will align with the Movement for Change party (Gorran) in upcoming elections, potentially weakening the ruling Kurdistan Democratic Party (KDP).

"If the KDP loses its sway in the government, Turkey may be less inclined to continue to invest in the region or offer economic aid," Stratfor stated. "Even so, Turkey knows that reducing its support will enable Iran, already dominant in Baghdad, to increase its clout in the region even more."

Stratfor explained that the KDP has security and economic ties to Turkish President Recep Tayyip Erdogan’s ruling Justice and Development Party (AKP), while the PUK is more aligned with Iran.

Moreover, the alliance may prevent KRG President Massoud Barzani from being reelected to another term, Stratfor said.

Although Gorran formed in reaction to the PUK, it has focused much of its criticism on the KDP in general and on Barzani in particular.

The report also noted that Gorran, despite holding more seats in parliament, has been dependent on the PUK because of the latter’s ties to the Kurdish Peshmerga security forces, who are politically divided between the PUK and the KDP.

The resulting political instability could also affect Barzani’s push for an independence referendum in Iraq’s parliament in Baghdad, where the Kurdish Regional Government is represented via deputies, Stratfor added.