US Likely to Send Small Arms, Anti-Tank Weapons to Libya 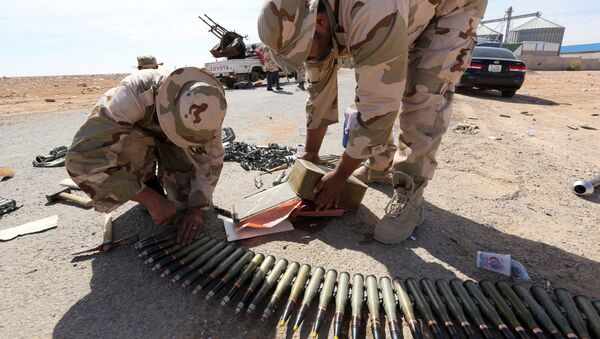 © AFP 2023 / MAHMUD TURKIA
Subscribe
International
India
Africa
The United States could provide the Libyan government with small arms, anti-tank guns and other defensive weapons to help Tripoli in its fight against extremists, former US Under Secretary of Defense Dov Zakheim told Sputnik.

WASHINGTON (Sputnik) — On Monday, 22 state ministers issued a joint communique announcing that the international community was prepared to respond to requests for weapons from Libya’s new Government of National Accord (GNA) to train and equip vetted troops.

In 2011, the UN Security Council imposed an arms embargo on Libya amid the Arab Spring revolution, citing government violence against civilians.

"My guess is that we [the United States] would send defensive weapons — small arms, ammunition, command and control equipment, perhaps anti-tank weapons," Zakheim stated on Tuesday.

The US military, Zakheim noted, would provide other equipment along the lines of what Washington has been sending to opposition forces in Syria, albeit how weapons would be monitored was still an open question.

"In theory the United States could monitor requests, but as there will be other nations participating if there is a UN mandate, the responsibility for monitoring requests need not fall to Washington," he explained.

Zakheim noted that he was unsure how the United Nations will deal with the Libyan case, but the organization’s record of monitoring weapons in Iraq and Afghanistan "has been mixed."

World
US Has Yet to See Requests From Libyan Government for Arms Supplies
The United States and Western powers, he warned, face "huge risks" by increasing support to Libya because they could get caught in the middle of yet another civil war.

"American voters are increasingly leery of such commitments… as the current election cycle clearly is demonstrating," he argued.

On Monday, US State Department spokesperson John Kirby said during a briefing that Washington has not seen any requests for arms supply from the GNA in Libya, but would look upon such requests favourably.

Libya has been in a state of civil war since the 2011 Arab Spring and the ouster of the nation’s long-time leader Muammar Gaddafi by Western-backed Islamic extremists. A UN-backed GNA unity government took charge of the country in late March.