Is UK’s Pro-EU Camp Relying Too Much on Economic Arguments? 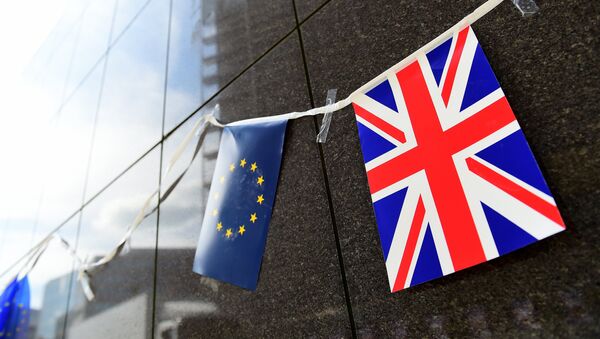 © AFP 2023 / EMMANUEL DUNAND
Subscribe
International
India
Africa
As the referendum on Britain’s future in the EU is getting closer and closer, advocates for the "remain" camp might be winning the economic argument, but it looks like they are trailing the Brexiteers when it comes to questions of democracy and identity.

Tuesday evening, in a debate on Brexit held at the Goodenough College in London, two representatives of the Leave campaign, Tory MP David Davis and journalist Bruno Waterfield faced off with Vicky Pryce and WSJ reporter Simon Nixon.

While both camps scored some points, many in the audience felt that the Remain camp was too technocratic and economy-centred when pursuing its case.

Both Pryce and Nixon mainly focused on extolling the benefits of the single market and the (generally pro-staying) position of UK businesses, while Davis and Waterfield rather built their cases in terms of democracy and sovereignty.

"I feel very disappointed by how many pro-remain people are behaving," Richard,who attended the conference, told Sputnik. "They are doing a great job at explaining the economic implications, but it shouldn’t be only about that. What about taking back control of our own state from unelected, undemocratic bureaucrats? I am leaning remain, but this is not okay."

Laura, a 50-year-old  from South London, told Sputnik that she was more convinced than ever to vote to leave. "In general, I just feel talked down to by the pro-EU camp. When they do not ramble about economy, they go on about the Armageddon that would happen if Britain left," she said.

Many on the leave side, in effect, have complained about the so-called "Project Fear" carried out by the remain camp. Pro-stay campaigners have often warned of how Brexit would benefit Russia’s Putin, Turkey, and in general peace and stability, besides the UK’s economy.

Just on Tuesday morning, PM Cameron said that Abu Bakr Al-Baghdadi, the founder and leader of terrorist organization ISIS would be happy if the UK left. To be fair, the remarks sounded like an intentionally exaggerated riposte to Conservative Brexiteer Boris Johnson, who last week compared the EU to an Adolf Hitler’s project.

Spirits running high are not good ahead of a referendum in which turnout is expected to play a key role, David Davis MP told Sputnik.

"I don’t think this helps the debate. I think the PM started it when he talked  of World War III [if Brexit happened]. It wasn't wise,and i don't think anybody believed it, and it didn't help his case. Hyping things up is not really good. Behind this whole referendum issue there is disaffection with the political establishment and I think it’s incumbent on us to be very careful, to not give people the impression we are taking them as fools. I think the more hyperbolic the debate,  the more likely that damage is done."

Davis also criticised the Remain camp for not providing enough evidence for their grim forecasts.

"They rely very heavily on establishment members coming along to sort of make an assertion. Obama,Christine Lagarde saying our economy would crash [if the UK leaves]— there is no evidence for that. This is an argument that should be decided on evidence. The Remain camp is not showing evidence, it’s just relying on authorities."