Police Use Tear Gas Against Trade Unions Protesters in Paris 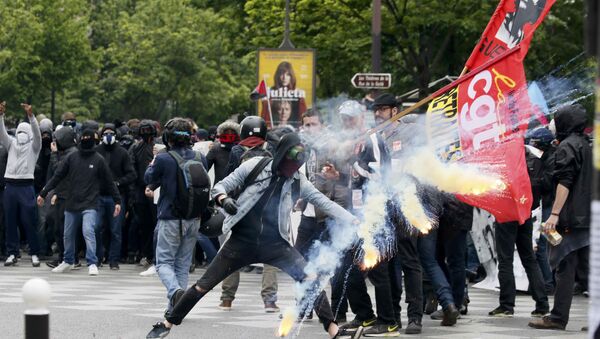 A protest against national labor reform in Paris has turned violent.

Trade unions protest against the French labor reform law is taking place in the French capital:

On May 12, the unpopular bill on labor reforms in France got a first-reading approval from the lower house of the country's parliament.

#France: During protest against the #LoiTravail forced through parliament without a vote by the govt. #manif17mai pic.twitter.com/VWKdMin8lG

​​The draft law on labor reform has been widely criticized as it would make it easier for companies to lay off staff and cut payment for overtime work.

​French cities have been rocked by mass protests against the labor reforms bill since late March, with mainly the youth protesting against amendments to the French labor code that may lead to an increase in working hours, among other unpopular measures.