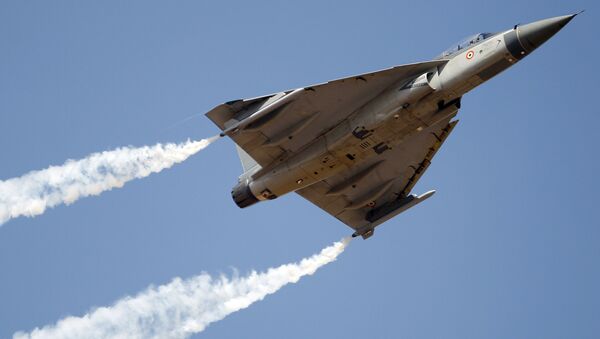 © AP Photo / Aijaz Rahi
Subscribe
Chief of Indian Air Force has test flown an indigenously designed and produced Light Combat Aircraft - Tejas, giving the go ahead to roll it out into active operations.

New Delhi (Sputnik) — The Indian Air Force (IAF) has finally found an indigenous replacement for its ageing fleet of MiG-21 and MiG-23 fighter aircraft. Chief of Air Staff, Air Chief Marshal Arup Raha flew the Tejas — a Light Combat Aircraft designed and developed by the state-run Hindustan Aeronautics Limited (HAL). According to a statement by HAL, after his maiden sortie, Air Chief Marshal Raha said, "It is my first sortie in a Tejas, it is a good aircraft for induction into IAF operations."

IAF chief Arup Raha takes a spin in a Tejas, declares it 'fit for induction'. pic.twitter.com/wOMTL6Gkxg

​The Air Chief Marshal carried out a number of manoeuvers in the twin-seater trainer aircraft including simulated air-to-air and air-to-ground attacks. He also assessed the advanced modes of the radar and Helmet Mounted Display Sight (HMDS). An ace fighter pilot himself, Air Chief Marshal Raha appreciated the flying qualities of the aircraft.

Stoic Silence: Dead End Looming Large for Rafale in India
Production of the Tejas aircraft has already commenced at HAL Bengaluru and the first squadron of the trainer LCA is expected to be formed by July 2016.

The Tejas LCA is a supersonic, single-engine multirole light fighter aircraft, which has been under development for the past three decades. It has been co-developed by the Aeronautical Development Agency in cooperation with HAL to replace the IAF's ageing fleet of MiG-21 and MiG-23 fighter aircraft.

The Tejas is however, still not combat-ready. Its final phase of weapon trials, including firing of BVR (beyond visual range) missiles, is currently under way. Moreover, the fighter is to get an AESA (active electronically scanned array) radar and advanced electronic warfare (EW) suite, and mid-air refueling capability, for the Mark-IA version that the IAF actually wants. This is likely to take another two years. This means the IAF will get the first 20 combat-ready Tejas by 2018.

Air Marshal Anil Chopra (retired) told Sputnik that the IAF will form only four squadrons out of the Mark-1A version to fulfil and immediate shortage. "The LCA Mark-II will fulfil the actual specifications of the IAF. This version will probably be delivered by 2022. Meanwhile, the LCA Mark-I currently available is also good enough for the Indian Air Force as it is capable of meeting most of the immediate requirements."

Meanwhile, manufacturer HAL is upbeat about the progress and hopes to capture small overseas markets for aircraft of this specification. "It is a morale boosting gesture from the IAF Chief and reposes great confidence of our valuable customer in our abilities", said T. Suvarna Raju, Chief Managing Director, HAL.