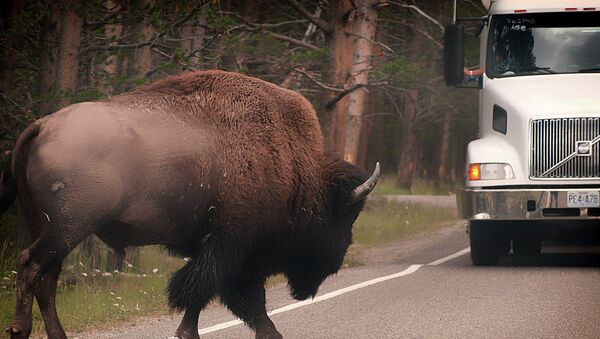 © Flickr / Ed Sweeney
Subscribe
Visitors to America's famous Yellowstone National Park in Wyoming attempted to 'rescue' a bison calf, causing its herd to abandon it; it was subsequently euthanized by park officials.

The Yellowstone National Park Service (NPS) released a statement Monday after a pair of tourists put a bison calf in an SUV. The NPS said they had to euthanize the animal because, after having interacted with humans, it was rejected by its herd.

Despite clearly-posted park regulations that require visitors to stay a minimum of 25 yards from all wildlife (and 100 yards from predators), a father and son decided to put an very young bison calf into their car over concerns that the animal was too cold.

While their intentions were noble, their decision was wrong, because their interference caused the calf's mother to abandon her offspring. The calf repeatedly approached the road and cars after its intimacy with humans, creating dangerous situations. Rangers tried to reunite the animal with the herd a number of times, but to no avail. The ranger service cannot raise rejected animals, as it is tasked with safeguarding the natural balance of the wilderness.

Bison calves can be rejected by their mothers for natural reasons. Rejected animals normally die of starvation, or are claimed by predators. Human intervention, however, increases the risk of rejection dramatically.

When working with wild animals, specialists take extensive measures to keep their effect to a minimum. For example, it is forbidden to speak while interacting with bear cubs that are intended to be resettled in the wild. This is done to prevent the animals from  losing their fear of humans, which can lead to injuries or death of the animal or human.

According to Yellowstone officials, five tourists in 2015 were injured after getting too close to a bison. Approaching any young wild animal is expressly forbidden at the park, since parent animals are ordinarily very protective and will act aggressively and quickly.