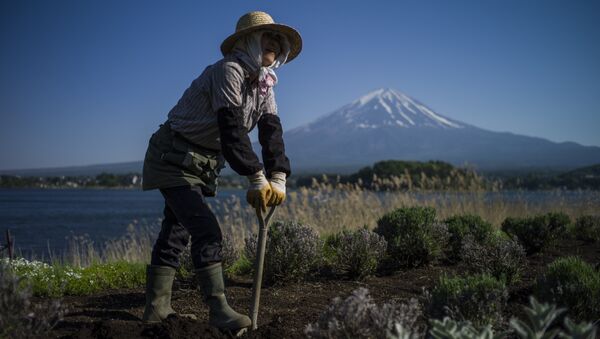 © AFP 2023 / FRED DUFOUR
Subscribe
International
India
Africa
At least 24 percent of Japanese surveyed indicated that they'd be ready to move to Russia's Far East to settle a free plot of land there, according to a poll conducted by Sputnik's Japanese edition.

Japan's 'New Approach' to Russia's Kurils: Breakthrough or Bluff?
A poll conducted by Sputnik's Japanese edition revealed that about 24 percent of respondents claim they are willing to move to Russia's Far East if they are provided with a free plot of land there.

The May 14 survey came a few weeks after Russian President Vladimir Putin signed a law offering land plots of 1 hectare (2.5 acres) in the country's Far East to citizens for free.

"When it comes to Russia, I would in any case want to move," a Twitter user nicknamed GraceOhara said.

Another Internet surfer said that "even though I missed the voting, I would have gladly moved to the Russian Far East."

The users suggested a wide array of ideas, with one of them calling for opening an analogue of the large Japanese online store HOMAC, which offers household goods for sale.

"Russian love DIY (do-it-yourself). Maybe, it would be relevant to open there [in the Far East] a HOMAC-like online store and start to trade?" the user TM-N tweeted.

The other 76 percent of respondents turned down the proposal, citing bad weather conditions in the area, among other things.

"The strength is needed to resist such cold weather so I guess, this proposal is only for people with very strong health," Saito Midoru tweeted.

Earlier, it was reported that the project to provide Russian citizens with free plots of land in the Far East would be enacted in several phases, starting in June 2016.

Parcels of land will be up for grabs in the regions of Yakutia, Kamchatka, Primorye, Khabarovsk, Amur, Magadan, Sakhalin, as well as in the Jewish and Chukotka autonomous regions.

Japanese Firm Mulls Construction of Woodworking Plant in Russia's Far East
Land will be offered for five years to anyone who is willing to work it or start any sort of business there.

The deal will be converted to lease or ownership rights after the initial period is over – or voided if the land has not been used.