Who is Dipping Into Their Sovereign Wealth Funds Now Oil is Cheap? 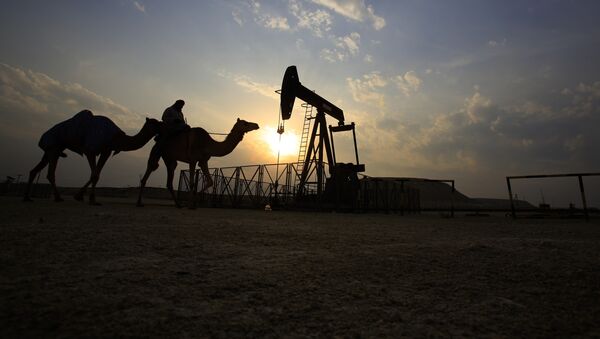 © AP Photo / Hasan Jamali
Subscribe
International
India
Africa
As many as 44 of the world’s countries have at least one sovereign wealth fund set up for a rainy day, and now it seems that for many of them that day has arrived. Let’s take a look at which of these countries have made use of their piggy banks.

Norway, the owner of the largest of the funds, set up in 1990s to safeguard the country’s oil wealth for future generations, announced in January that it had made its first withdrawal from the country's sovereign wealth fund while trying to counter the economic slowdown.

Norway Taps Its Oil Money ‘Piggy Bank’ to Cope With Economic Downturn
The first withdrawal from the $870 billion wealth fund, which is called the Government Pension Fund of Norway, took place in January when 6.7 billion Norwegian kroner ($780 million) was used to pay for public spending.

The fund was set up twenty years ago for the purpose of sharing the wealth from oil and gas production with future generations. The fund is invested in foreign stocks, bonds and real estate.

The fund received its first capital transfer in 1996 and receives its investment guidelines from the government, and according to Bloomberg, 59.8 percent of it is invested in stocks, 37 percent in bonds and 3.1 percent in real estate at the end of the first quarter.

It is mandated to hold 60 percent, 35 percent and 5 percent in those asset classes, respectively, though the government has proposed raising the cap on properties.

According to the estimates of the International Monetary Fund and Fitch Ratings, the Fund can easily offset the fiscal hit from the recent global drop in oil prices or help to prevent the so-called “Dutch disease” – the tendency of natural-resource revenues to strengthen local currencies and weaken economic competitiveness – for more than eight years should the prices rebound further.

World’s Largest Wealth Fund Hit by Oil Slump, Emerging Markets Volatility
However the original idea to keep the cash cushion for future generations as Norway's population ages, gave way to the idea to use it now as the current generation needs it.

Saudi Arabia and The Middle East

In its report last year on Middle Eastern and North African economies, the International Monetary Fund calculated that if oil prices stay at current levels, Saudi Arabia will exhaust its “fiscal buffers” in about five years, and so will Algeria.

Bahrain, Libya and Oman have even less time.

Among the Middle Eastern petroleum exporters, the United Arab Emirates, Kuwait and Qatar are the luckiest. They have sufficient cushions to last them more than two decades.

Even those funds, however, won't be investing as actively as previously because governments in the Middle East prefer drawing down the funds to reducing budget expenditure.

However, the recent revelation of Mohammed Al-Sheikh, financial adviser to Saudi Arabian Deputy Crown Prince Mohammed bin Salman suggested that, last spring, Saudi Arabia was burning through its foreign reserves faster than anyone had imagined: with such spending levels it was only two years away from insolvency – it would have gone “completely broke” by early 2017.

Saudi Arabia Could Have Gone Completely Broke by Early 2017
So in late April, Mohammed bin Salman unveiled Saudi Arabia’s new economic vision, which involves the creation of the world’s largest sovereign wealth fund, which will eventually hold more than $2 trillion in assets — enough to buy all of Apple, Google, Microsoft, and Berkshire Hathaway, the world’s four largest public companies.

The move is aimed at diversifying its economy away from oil in the wake of a dramatic fall in oil prices and make the country’s economy completely free from oil revenues by 2020.

However, according to OilPrice.com website, “raising a megafund of that size is practically next to impossible.”

“If the crude oil averages below $40 till the end of 2017, the Saudi Kingdom will likely lose another $150 to 200 billion from their reserves in the next two years. A few experts expect the reserves to drop to $200 billion by 2018 if the oil prices don’t recover.”

Wind of Change: Saudi Arabia Prepares for the End of 'The Oil Age'
If the reserves drop below a critical level, Saudi Arabia will be unable to maintain the riyal’s peg to the US dollar. Abandoning the peg will usher in a different set of problems, which the Kingdom cannot afford, it therefore states.

According to other estimates by the International Monetary Fund and Fitch Ratings, Norway, Kuwait, Qatar and the United Arab Emirates all need relatively low oil prices of $40, $54, $60 and $77 a barrel, respectively, to balance their budgets.

In contrast, Saudi Arabia, Venezuela, Libya and numerous other oil producers have break-even points that top $100 a barrel.

Russia to Deplete Only Half of Reserve Fund If Oil Costs $40 in 2016
Russia currently operates two sovereign-wealth funds: the Russian National Wealth Fund, which supports the nation’s pension system, and the Reserve Fund, which is a part of the federal budget asset.

According to a recent report by the Sovereign Wealth Fund Institute, Russia’s Ministry of Economic Development in a 2017-2019 study forecasts the amount of assets in both Funds to fall to 2 trillion rubles by 2020.