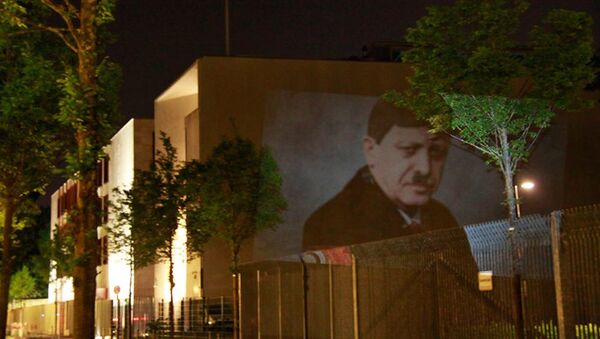 © Photo : PixelHELPER
Subscribe
A group of German artists have projected politically-charged images onto the Turkish and Saudi Arabian embassies in Berlin, which compare Erdogan to Hitler and implicate the Saudis in supporting terrorism.

A group of German artists have used an unusual method to draw attention to the activities of the Turkish government, using a projector to cover the Turkish Embassy with images of Turkey's President Recep Tayyip Erdogan where the mustached authoritarian leader resembles Hitler.

One of the images depicts Erdogan wearing a red and white Nazi armband and Hitler mustache, and another shows him side by side with Hitler.​ 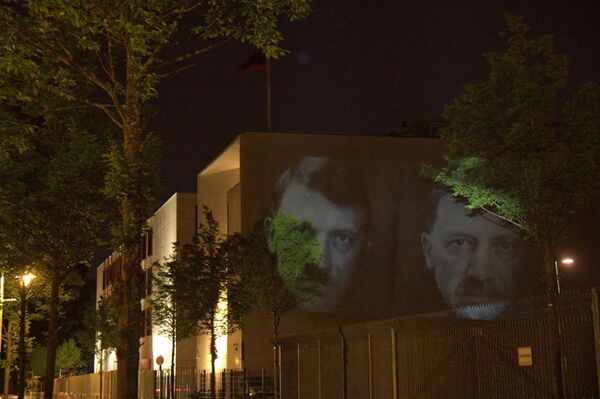 The artwork that was projected onto the Turkish embassy in Berlin
© Photo : PixelHELPER
Oliver Bienkowski from PixelHELPER, the group of artists responsible, told Sputnik Germany that they are seeking to highlight parallels between the Turkish President and their country's most infamous leader.

"We wanted to draw attention to the terrible human rights violations that Erdogan has perpetrated in his country, for example: persecution of the opposition, abolition of the opposition's rights in parliament, sentry guns on the border with Syria, and restrictions on press freedom," Bienkowski explained.

The group posted their work on Facebook, where users were divided over the images; some praised the artists but one said he disagreed with an attempt to compare "Erdogan or any other contemporary politician to Hitler," calling it a "trivialization of the Holocaust."

​Bienkowski responded to the criticism, telling Sputnik that he thinks the comparison with Hitler is a valid one.

"When comparing Erdogan with Hitler, apart from the Holocaust, there are definite parallels," he said, and alleged that Turkey is supplying arms to the terrorist group Daesh.

"There are secret arms deliveries to Daesh using the camouflaged trucks of the German Red Cross, which doesn't happen in even the worst guerrilla wars. The fact that Turkey also buys oil from Daesh terrorists means that it simply cannot be a negotiating partner for the EU," Bienkowski said.

EXCLUSIVE: Daesh Terrorists Secretly Treated at Turkish Hospital (PHOTOS)
The artist, speaking on Friday, almost a week after the caricatures were first published on Saturday night, said that as yet the group has not received any response from the Turkish embassy or the authorities, and does not expect any legal consequences.

"We did get some death threats, but nothing has really happened."

"We projected our Hitler caricature of Erdogan onto the building as an art installation, like an ordinary newspaper cartoon, and we are relying on the freedom of the press, that's why there can be no legal action," he said.

On May 12 the group uploaded more pictures to Facebook exhibiting their artwork, this time at the Saudi embassy. Their caricatures accuse Riyadh of financing Daesh, and called on the German government to stop arms exports to Saudi Arabia.

German Lawmaker Shocks Parliament by Reciting Poem Mocking Erdogan
​Bienkowski urged Germany and the EU to stop cooperating with Saudi Arabia, and likened its government to that of the Daesh terrorist group.

"I am lost for words regarding Saudi Arabia. They are members of the UN human rights council, but according to official figures, they killed more people last year than Daesh. That means that the legal foundations of Daesh and Saudi Arabia are practically the same."

"Financing terrorist organizations is forbidden in Germany. For me its unacceptable that European companies like Airbus are helping Saudi Arabia to build a high-tech wall to protect itself from Daesh, while it won't take any refugees. Saudi Arabia is the most inhumane country on Earth, I can't understand at all how they became members of the UN human rights council."

000000
Popular comments
Keep up the good work people need to wake up in Europe.
jj42
16 May 2016, 17:01 GMT3
000000
copius, There's also the "little" fact that Israel is attacking the Syrian government as it attacks the terrorists. That can't be seen in any way than fighting with terrorists against a common enemy. Israel has also stated, along with Saudi Arabia, that Iran is a greater concern for them than terrorists (ISIS). Israel adds Hezbollah as also a greater concern for them than ISIS. I think that alone is reason to not try to connect any issue that may be considered pro-Israel with attacks on Erdogan for supporting terrorists in Syria. Israel is doing it too.
jas
16 May 2016, 17:23 GMT3
000000
Newsfeed
0
New firstOld first
loader
LIVE
Заголовок открываемого материала
Access to the chat has been blocked for violating the rules . You will be able to participate again through:∞. If you do not agree with the blocking, please use the feedback form
The discussion is closed. You can participate in the discussion within 24 hours after the publication of the article.
To participate in the discussion
log in or register
loader
Chats
Заголовок открываемого материала
Worldwide
InternationalEnglishEnglishMundoEspañolSpanish
Europe
DeutschlandDeutschGermanFranceFrançaisFrenchΕλλάδαΕλληνικάGreekItaliaItalianoItalianČeská republikaČeštinaCzechPolskaPolskiPolishСрбиjаСрпскиSerbianLatvijaLatviešuLatvianLietuvaLietuviųLithuanianMoldovaMoldoveneascăMoldavianБеларусьБеларускiBelarusian
Transcaucasia
ԱրմենիաՀայերենArmenianАҧсныАҧсышәалаAbkhazХуссар ИрыстонИронауОssetianსაქართველოქართულიGeorgianAzərbaycanАzərbaycancaAzerbaijani
Middle East
Sputnik عربيArabicArabicTürkiyeTürkçeTurkishSputnik ایرانPersianPersianSputnik افغانستانDariDari
Central Asia
ҚазақстанҚазақ тіліKazakhКыргызстанКыргызчаKyrgyzOʻzbekistonЎзбекчаUzbekТоҷикистонТоҷикӣTajik
East & Southeast Asia
Việt NamTiếng ViệtVietnamese日本日本語Japanese中国中文Chinese
South America
BrasilPortuguêsPortuguese
NewsfeedBreaking
08:10 GMTUS Surgeons Successfully Transplant Pig's Kidney Into Human for the First Time
07:25 GMTFinland Presses Sweden to Return Historic Skulls Exhumed for Racial Biology Studies
06:55 GMTTwo Russian Jets Intercept American Bombers Over Black Sea
06:32 GMTDeripaska's Spokesperson Links FBI Raids of Relatives' Homes to Sanctions
06:31 GMTFinnish Military Lowers Physical Condition Threshold to Include 'PlayStation Boys'
06:23 GMTMoroccan Laboratory Plans to Produce Russia's Sputnik V Vaccine
06:16 GMTSwedish Submarine Loaded Live Torpedoes Amid Major Russian Drill – Report
06:05 GMT'We're on the Edge': UK Gov't Urged to Enact 'Plan B' to Prevent NHS Crisis Amid Rise in COVID Cases
05:58 GMTIsrael & Sudan a Year After Normalisation: Relations Haven't Taken Off, Here's Why
05:00 GMTNew Material to Protect Against Radiation Created in Russia
04:25 GMTMultiple Casualties Reported After Explosion Hits Bus in Damascus, Syria - Photos, Video
04:03 GMTTime's Up, Jeffrey: New Documentary Shows Epstein Claiming to Support Anti-Harassment Movement
02:49 GMTBuilding 'Metaverse': Facebook Plans to Change Its Name Next Week - Report
02:42 GMTPhoto: Texas Gov. Mocks Illegal Immigrants Trying to Cross the Border in Camouflage
02:27 GMTAlyssa Milano Arrested at Protest Outside White House for Refusing to Obey Police
02:05 GMTFBI Agents Leave House of Deripaska's Relatives in Washington, Correspondent Says
01:41 GMTEcuador President Declares State of Emergency Amid Rise in Violent Crime
00:57 GMTUS Law Enforcement Unions Decry 'Defund the Police' for Rise in Assaults on Officers - Report
00:52 GMTLabor Activists Hail ‘Striketober’ as Over 100,000 Union Workers Across US Prepare Work Stoppages
00:46 GMTUS House Committee Advances Resolution Calling for Criminal Contempt Charge Against Bannon