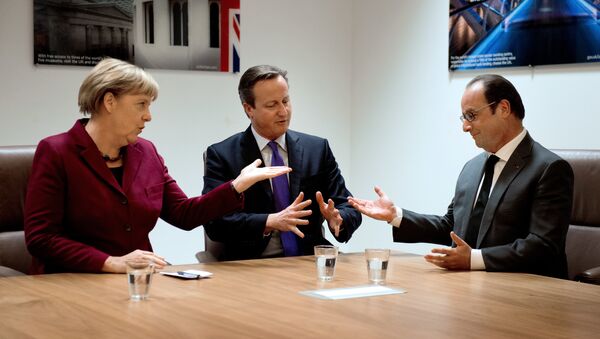 © AFP 2023 / ALAIN JOCARD
Subscribe
International
India
Africa
The opposition against the extension of the anti-Russian sanctions has increased within the EU, and it would be very difficult to achieve a common approach on the issue, German Foreign Minister Frank-Walter Steinmeier said in an interview with Tagesspiegel.

More and more European countries are criticizing the restrictive measures imposed on Russia and are calling for them to be withdrawn.

"We can see that the resistance against the extension of the sanctions within the EU has grown and compared with the last year it would be more difficult to reach a common stance on the issue," Steinmeier told the newspaper.

According to the politician, the West often forgets that it is interested in active cooperation with Russia.

"We need Russia for tackling major international crises. In the case of Syria, this is already taken for granted. And I venture to predict, we will also need Russia's involvement to stabilize the situation in Libya," Steinmeier said.

Lower Austria Urges Lifting EU Sanctions Against Russia
On Thursday, the French National Assembly, the lower house of the parliament, voted in favor of a resolution calling for the lifting of anti-Russian sanctions. The resolution proposed by the opposition calls on the French government to protest the extension of EU sanctions against Moscow.

Washington and Brussels imposed sanctions against Russian individuals and the Russian defense, energy and banking sectors in July 2014, due to Russia's alleged involvement in the Ukrainian crisis, which Moscow constantly denied.

Russia responded by introducing a year-long food embargo on imports from the United States, the European Union and other countries that targeted Russia, subsequently extending the current embargo until August 5, 2016.

The extension of the EU economic sanctions against Russia, which are due to expire in July, is likely to be on the agenda of the EU leaders' summit, which is scheduled for June 28-29. Many European entrepreneurs and politicians have repeatedly criticized the restrictive measures due to their negative impact on the European economy.