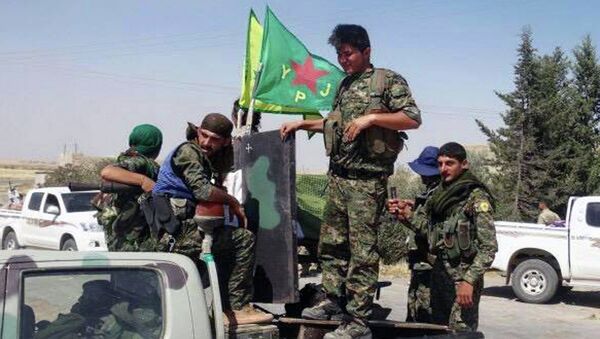 On Wednesday, SDF Spokesman Tajir Kobani announced that commanders of the SDF-affiliated groups in Northern Syria have, in a secret meeting, coordinated the process of a joint final operation for liberating Raqqa from Daesh terrorists.

Syrian Democratic Forces to Sputnik: We're Getting Ready to Liberate Raqqa
“The Kurdish fighters are now only 30 kilometers from Raqqa city,” the Arabic-language al-Watan newspaper quoted unnamed sources as saying on Sunday.

“Our troops with their heavy weapons have gathered near Kobani in Northern Syria,” the spokesman said, adding, “We will begin our operation from three directions simultaneously.”

“As soon as the Russian envoy in the UN announced the preparation of the Syrian Army and its popular allies to launch large-scale operations to liberate Raqqa and end ISIL’s siege of Deir Ezzur, the ISIL terrorists started covering their military vehicles and equipment to avoid being identified in the event of an airstrike,” the sources said.

Earlier this week, spokesman for the Syrian Democratic Forces (SDF) alliance Tajir Kobani told Sputnik that they are readying a three-pronged attack on Raqqa that would eventually free the city from extremists.

The offensives are expected to be conducted from the northeast and northwest of the war-torn country, he added.

“Raqqa's liberation,” Kobani underscored, “will be a serious blow to Daesh positions in Syria. We intend to liberate the people of Raqqa from the jihadists.”

It was reported that the movement of extremists throughout Raqqa plays into the hands of the anti-Daesh coalition, as it provides surveillance aircraft with the opportunity to detect extremist positions.