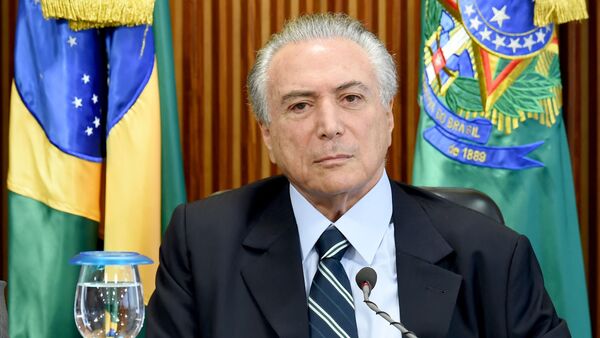 Brazil's new interim President Michel Temer has named new members of his cabinet. Temer unveiled an all-male and conspicuously white government on Thursday. Radio Sputnik spoke with Farida Jalalzai, about the cabinet and whether Temer will be able to rid the country of financial woes and corruption.

Rousseff Slams Brazil New Cabinet for Insufficient Gender, Racial Equality
“There is zero diversity in that regard. They are all white and they are all men. The gender part is really worth noting because when you see people appointing cabinets anywhere in the democratic world there is kind of this long standing assumption that you are going to have some women in the cabinet,” Farida Jalalzai, Associate Professor of Political Science at the Oklahoma State University, said in an interview.

Jalalzai further said, “If we see how Dilma approached her presidency she had a record breaking number of women in her cabinet. She started out her first term with about 24% female appointees and that increased a bit towards the middle of her first term.”

Dilma was also appointing these women to important positions and there was one woman who identified herself as having African roots. But now the newly appointed cabinet is full of white people and according to the analyst lacks a complete representation of what Brazil stands for.

Talking about the daunting economic and financial situation in Brazil, the analyst said that there would be a lot of scrutiny on what Temer does now that he has taken office.

“Whether or not he is able to make important changes that put Brazil on this route to recovery is an open question and anything is possible. Probably it is a very daunting task and especially because he is charged to do this really in the default,” Jalalzai said.

International Financial Interests Sought to Topple Brazil’s President
Talking about the accusations put on Dilma, the analyst said that according to her news source there isn’t any specific evidence that Dilma herself has personally profited from any kind of corruption. She said that corruption is deeply embedded in Brazil within its institutions.

“But it seems like Dilma is getting more scrutiny than even her predecessor Lula had.”

The analyst further noted that most of the people who are accusing her of corruption themselves have corruption charges against them.

Dilma Rousseff’s term was suspended on Thursday as the upper house of the Brazilian parliament voted to start impeachment proceedings against her. The latter could last for up to 180 days.

Rousseff has been facing a wave of public discontent for over a year amid Brazil’s struggling economy and a major corruption scandal in the country. She was also accused of concealing the country’s budget deficit ahead of the 2014 re-election.

In her televised speech on Thursday afternoon, Rousseff argued that the impeachment vote was a coup and stressed that she did not commit an impeachable crime.