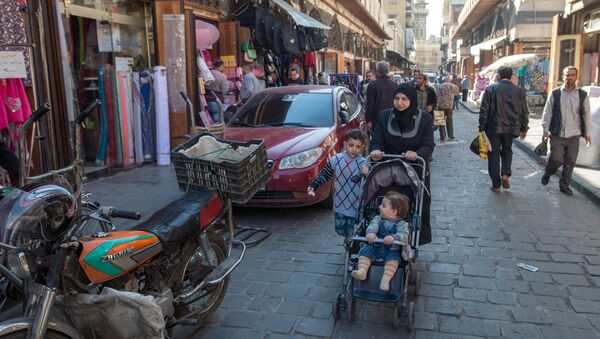 © Sputnik / Iliya Pitalev
/
Go to the photo bank
Subscribe
The Russian Reconciliation Center has delivered 1.5 tonnes of humanitarian aid for the population of Syria's Latakia province.

MOSCOW (Sputnik) — The Russian Aerospace Forces have delivered 19 tonnes of food to the Hmeimim airbase, the Russian Defense Ministry said in a bulletin posted on its website.

"Military transport aircraft of the Russian Aerospace Forces have delivered 19 tons of food products. Representatives of the Centre for reconciliation have delivered 1.5 tons of humanitarian aid to internally displaced persons in Jindiriyah (Latakia province)," the bulletin posted Saturday read.

A camp of internally displaced persons is located in the province of Latakia, according to the bulletin.

As many as 48 people have received medical assistance, including 17 children, the reconciliation center said.

According to the bulletin, the center's leadership has held a working meeting with Latakia's governor to discuss the issues of providing humanitarian aid to the population of localities mostly affected by hostilities.

A US-Russia-brokered ceasefire came into force across Syria on February 27. It was supported by Damascus, as well as by dozens of opposition groups on the ground. The Daesh group and the al-Nusra Front, both outlawed in Russia, were not part of the deal.