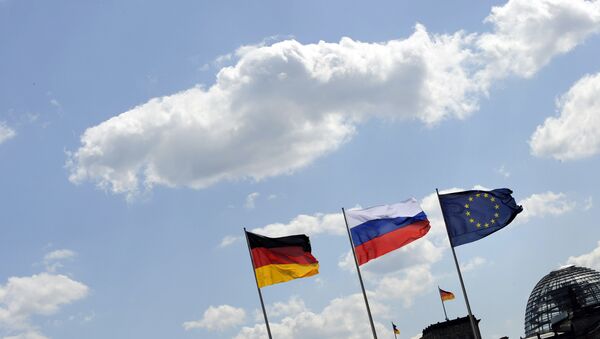 © AFP 2023 / BARBARA SAX
Subscribe
International
India
Africa
Germany should withdraw sanctions against Russia as they have a negative effect on the German economy and the economy of the federal state of Saxony-Anhalt in particular, Minister of Economy in the German federal state of Saxony-Anhalt Jörg Felgner said in an interview with Volksstimme.

That Awkward Moment: Germany Trying to Bypass Anti-Russian Sanctions
According to the politician, all federal states in eastern Germany must publicly oppose restrictive measures and seek the normalization of relations with Russia.

"Such downturn has direct impact on the economic growth. That is why I will try to normalize trade relations with Russia as quickly as possible. And that is why I say that the embargo against Russia must be stopped," he said, adding that the withdrawal of sanctions will contribute to the growth of his federal state's economy.

In an interview with Volksstimme, Felgner stressed that sanctions are an ineffective measure and suggested that all residents of the Eastern Germany should appeal for their lifting.

"The history of Cuba has shown that economic sanctions usually don't bring much result. So I hope that I can form a political alliance, particularly in eastern Germany, which would campaign for the withdrawal of the sanctions. Also, I believe it is necessary to expand relations with Russia and open a contact office in Moscow," the politician stressed.

The EU imposed sanctions against Russia in July 2014 over Moscow's alleged involvement in the Ukrainian crisis, although Russia has repeatedly denied the allegations. Currently, the sanctions are in place until July 31, 2016, but may be prolonged. In response, Moscow introduced a food import ban until late-August 2016.