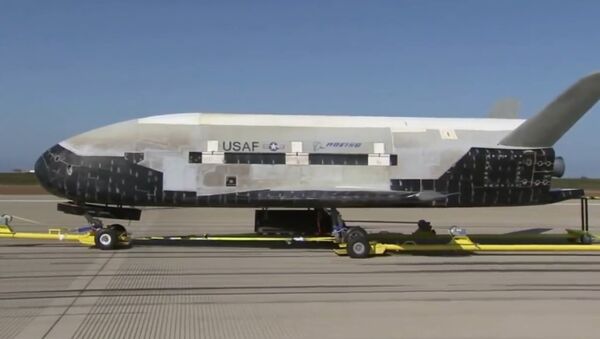 The Boeing X-37 spacecraft is designed to practice destroying space satellites, US experts suggests. Russian political analyst Vladimir Kozin said that the US plans to create a battlefield in space.

According to the report, one of the goals of the program is to compare the costs of such a spacecraft with the costs of missiles.

US Military Wants Space Arms Race to Boost Budget – Former DoD Official
For the first time, the Boeing X-37 was launched on May 20, 2015. In the beginning, the goals of the program were not revealed. According to the official version, the military and NASA tested an ion rocket engine as well as the impact of space conditions on advanced materials.

The program was implemented jointly by NASA and Boeing, starting in 1999. It was expected that the spacecraft would be used to repair satellites at an altitude of up to 700 kilometers. However, five years later the program was classified and handed over to DARPA.

From the very beginning, the program has had military goals, Vladimir Kozin, an analyst at the Russian Institute for Strategic Research, told Sputnik Radio.

"This is not the first time such an experiment has been carried out. The spacecraft has a large cargo bay capable of carrying space-to-space weapons or weapons which could be used from space to earth. This is why the Boeing X-37 is a long-term military program," Kozin explained.
According to the analyst, the US wants to turn space into a real battlefield.

World
China Opposes Arms Race in Space - Foreign Ministry
"Washington ignores its NATO allies and wants to create in space a platform for future combat actions, not like in George Lucas’ movies, but with real space weapons," he suggested.

Before Barack Obama became the US president, during his presidential campaign, he called for talks with Russia on anti-satellite weapons which started back in the 1970s but then was terminated by Washington, the analyst said.

However, the problem has not yet been solved, he added.

"Of course, some military systems can be deployed to space, but not weapons. They are surveillance, meteorological and navigation satellites. But there should be no weapons in space. The US wants a military monopoly in space," he concluded.

Earlier this week, The Washington Post reported that US Assistant Secretary of State for Arms Control Frank Rose had expressed concern over what he alleged was the continued development by Russia and China of anti-satellite weapons.

"The Pentagon needs a cold war for PR reasons and hopefully to transfer money from its out-of-control operating budgets to its investment accounts," Spinney said.