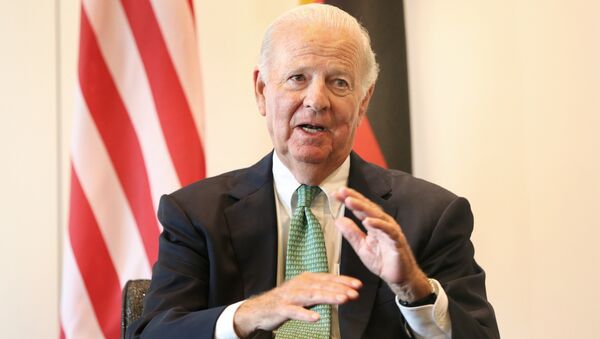 © AFP 2023 / RONNY HARTMANN
Subscribe
International
India
Africa
According to the former US secretary of state, promoting US allies Japan and South Korea to develop their own nuclear deterrent would further increase insecurity.

WASHINGTON (Sputnik) — The suggestion made by Republican presidential candidate Donald Trump that US allies Japan and South Korea might develop their own nuclear deterrent would further promote insecurity, former US Secretary of State James Baker III said on Thursday.

"The more countries that acquire nuclear weapons, the more instability there is going to be in the world," Baker stated in a US Senate Foreign Relations Committee hearing on the US role in the world.

Prior to the March Nuclear Security Summit in Washington, DC, Trump suggested that the United States, shouldering too much of the defense responsibilities for its allies, might consider cutting Japan and South Korea from its nuclear umbrella, allowing the nations to develop their own strategic deterrent.

"We have got a lot of problems today, but you would have a hell of a lot more if that were the case," Baker said of the suggestion. "Ever since the end of World War II, America has led the fight against non-proliferation… we ought not to abandon that fight."