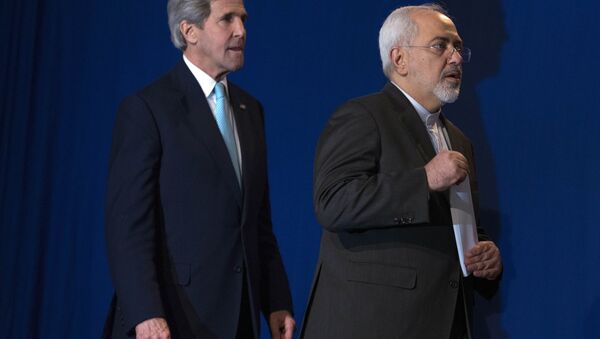 A minor scandal broke out in Washington earlier this week after a Fox News reporter discovered that a portion of his 2013 exchange with former State Department spokesperson Jen Psaki about the Iran nuclear deal had disappeared from its website.

US Senate Democrats Defeat Latest Republican Attack on Obama Iran Policy
On Tuesday, Fox News correspondent James Rosen complained that a portion of his exchange with Psaki in a press conference in December 2013 had been edited out. In the deleted segment, the reporter had asked whether it was "the policy of the State Department, where the preservation of the secrecy of secret negotiations is concerned, to lie in order to achieve this goal?"

Rosen posed the question based on a tip he had received that direct secret talks between Washington and Tehran were taking place over Iran's nuclear program. Psaki's predecessor, former State Department spokeswoman Victoria Nuland had earlier denied that any one-on-one negotiations outside the international P5+1 group were under way.

Rosen's question, and Psaki's response, that "there are times where diplomacy needs privacy in order to progress," was curiously edited out of the 2013 clip found on the State Department's website. The agency later blamed the disappearance on a 'glitch', and said that it had been restored in full following a complaint by Fox.

US Congress to Hold Hearing on Risks of Economic Cooperation With Iran
Rosen said that he was 'stunned' by the apparent attempt at censorship, and added that the State Department "could not explain" to him "why this had been done."

The journalist said he noticed the missing question when doing a report on an interview given by Obama administration Deputy National Security Adviser Ben Rhodes to The New York Times Magazine. In the interview, the official candidly admitted misleading US Congress and the media on the timeline of negotiations with Iran.

The talks, Rhodes said, began in mid-2012, before US presidential elections, and before moderate Iranian President Hassan Rouhani came to power. The story about talks intensifying in 2013, he added, "was largely manufactured for the purpose of selling the deal."

Speaking to Sputnik Persian about the odd incident, Emad Abshenass, editor in chief of the Iran Press newspaper, suggested that it was obvious to him that this was an attempt by President Barack Obama to preserve his legacy.

"For the United States, and for the Obama administration in particular, the issue of implementing the Joint Compressive Plan of Action (JCPA) on the Iran nuclear program is perhaps even more important than it is for Iran," the journalist noted. "After all, Mr. Obama sought to see to it that it was during his presidency that such a historical step – an agreement with Iran, took place."

Echo of Iran Nuclear Deal: Iran Vows to Sink US Ships if Threatened
"Naturally," Absehnass added, any comments or statements which could have a negative effect on the process of the JCPA's implementation are not helpful to the Obama administration. The case of the disappearance of these State Department comments is an indication that the US media is putting a lot of pressure on their government and the State Department."

In fact, the journalist said, "the pressure is so high that it has even become a subject of discussion by the Congress. In this regard, the US government chose to remove such comments, so that they would not once again become a pretext for a new scandal in the eyes of the public." The attempt seems to have failed.