Against All Odds: How German Companies Bypass Anti-Russian Sanctions 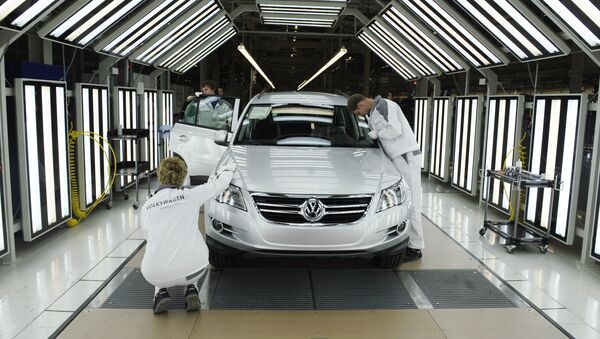 © Sputnik / Grigory Sisoev
/
Go to the photo bank
Subscribe
German companies are stepping up their efforts to bypass Western anti-Russian sanctions since Russian remains one of the most lucrative markets in Europe. In order to operate under sanctions, German companies open their own production in and invest in factories in Russia.

Over 70% of Germans Want Anti-Russia Sanctions Scaled Down, Lifted
"With a population of 140 million people, Russia is a very large market," Jurgen Konig, head of the Russian office of pharmaceutical giant Merck, said. However, he added that the company is optimistic about its future in Russia and "fears no crisis and sanctions."

Merck has been bypassing anti-Russian sanctions, cooperating with Russian companies Farmstandart and Nanotek in producing medicines in Russia. In addition, the company is investing in personnel training and new production equipment.

Due to sanctions and the worsening economic environment, German exports to Russia dropped by €8.5 billion, to nearly €21 billion. Among the most affected sectors were the automotive industry, engineering industry, energy, electronics as well as the agricultural industry. Around 400 of 6,000 German companies working in Russia have left the market.

At the same time, according to a recent report by EY, 80 percent of German companies do not plan to leave the Russian market. Some companies are acting like Merck, starting or expanding production in Russia. Among them are such companies as GEA, Bionorica, Siemens, and Claas.

"For German companies, Russia’s is the biggest market in Europe. It needs modernization but it also has a great consumer capacity," Vladimir Nikitenko, deputy chair of the Russian-German Trade Chamber, was quoted as saying by WirtschaftsWoche Heute.

Power Up: French Company Delivers Engine for Russia’s Newest Helicopter
However, other than launching their own production lines in Russia, German companies have another goal – to increase their market shares as well as to save money on custom tariffs and logistics. Moreover, foreign companies investing in Russia could be granted subsidies and investments contracts on special terms, including exemption of taxes.

The EU imposed sanctions against Russia in July 2014 over Moscow’s alleged involvement in the Ukrainian crisis. Russia has denied the allegations. In March 2015, Brussels said the sanctions would be lifted if the Minsk agreements were implemented. Currently, the sanctions are in place until July 31, 2016, but may be prolonged. In response, Moscow introduced a food import ban until late-August 2016. According to the Russian-German Trade Chamber, German companies do not expect that sanctions will soon be lifted.

German agricultural producers have long been working in Russia since part of their imports to Russia was banned back in 2012. In 2012-2014, Russia sent veterinary commissions to Germany and other EU countries to find violations of sanitary norms. As a result, almost all German dairy and meat producers were banned from exporting their products to Russia.

Lower Austria Urges Lifting EU Sanctions Against Russia
Pharmaceutical company Bionorica has planned to start production at its Voronezh plant by 2017. Several months ago, Novartis opened a factory in St. Petersburg which cost nearly €100 million. By 2017, AstroZeneca will invest nearly €200 million into production in Russia.

Companies like Merck which have no production lines in Russia will continue to cooperate with their Russian partners.

000000
Popular comments
as Victoria Nuland said "Fuck the EU"
asco
12 May 2016, 18:31 GMT
000000
business has to survive - despite the politicians.
michael
13 May 2016, 02:49 GMT
000000
Newsfeed
0
New firstOld first
loader
LIVE
Заголовок открываемого материала
Access to the chat has been blocked for violating the rules . You will be able to participate again through:∞. If you do not agree with the blocking, please use the feedback form
The discussion is closed. You can participate in the discussion within 24 hours after the publication of the article.
To participate in the discussion
log in or register
loader
Chats
Заголовок открываемого материала
Worldwide
InternationalEnglishEnglishMundoEspañolSpanish
Europe
DeutschlandDeutschGermanFranceFrançaisFrenchΕλλάδαΕλληνικάGreekItaliaItalianoItalianČeská republikaČeštinaCzechPolskaPolskiPolishСрбиjаСрпскиSerbianLatvijaLatviešuLatvianLietuvaLietuviųLithuanianMoldovaMoldoveneascăMoldavianБеларусьБеларускiBelarusian
Transcaucasia
ԱրմենիաՀայերենArmenianАҧсныАҧсышәалаAbkhazХуссар ИрыстонИронауОssetianსაქართველოქართულიGeorgianAzərbaycanАzərbaycancaAzerbaijani
Middle East
Sputnik عربيArabicArabicTürkiyeTürkçeTurkishSputnik ایرانPersianPersianSputnik افغانستانDariDari
Central Asia
ҚазақстанҚазақ тіліKazakhКыргызстанКыргызчаKyrgyzOʻzbekistonЎзбекчаUzbekТоҷикистонТоҷикӣTajik
East & Southeast Asia
Việt NamTiếng ViệtVietnamese日本日本語Japanese中国中文Chinese
South America
BrasilPortuguêsPortuguese
NewsfeedBreaking
04:31 GMTFacebook Struggled to Curb Violent, Divisive Content in India, Internal Documents Show
03:23 GMTWho’s the Best Football Player in the World?
02:45 GMTAmerican Film Institute Establishes Scholarship in Memory of Halyna Hutchins
02:30 GMTMore Than 10,000 Sequoias Must Be Removed After California Wildfires, National Parks Reveal
01:00 GMTWho has the Edge Between Manchester United and Liverpool?
00:12 GMTBritish Military Brings Over 100 People Who Had Left Afghanistan to UK - Defense Ministry
YesterdayUS Seeking Clarity Over Turkey’s Intention to Declare US Ambassador Persona Non Grata
YesterdayUS Authorities Getting Veterans Involved in Resettlement on Afghan Refugees - Reports
YesterdayBiden’s Popularity Drops More Than That of Any Other US Leader Since End of WWII - Poll
Yesterday‘Rust’ Director ‘Gutted’ by Fatal Shooting of Halyna Hutchins on Set
YesterdayPotty-Mouthed PM: Broadcaster Blocks Boris Johnson's Remarks on Gay Men, Muslim Women
YesterdayHome Run! The Astros Win a Ticket to the World Series Amid Sign-Stealing Scandal
YesterdayColombian Authorities Reportedly Capture Elusive Drug Lord Otoniel, Leader of Clan del Golfo
YesterdayTwitter CEO Jack Dorsey Issues Cryptic Warning of ‘Hyperinflation’ Soon To Happen in the US
YesterdayOne Person Killed, 7 Injured in Shooting Near University Campus in US
YesterdayIran Set to Cooperate With Islamic World in Nuclear Development - Spokeperson
YesterdaySupermarkets in UK Reportedly Use Cardboard Cut-Outs to Disguise Empty Shelves
Yesterday5.0 Magnitude Earthquake Shakes La Palma as Spanish Island Territory Reels From Volcano Eruption
YesterdayJeremy Clarkson Slams 'F***ing Government' at Farming Awards Ceremony - Video
YesterdayPakistan Denies Reports of Preparing to Sign Airspace Agreement With US