Blackmail or Protection? Why France Mulls Banning US Gas Supplies 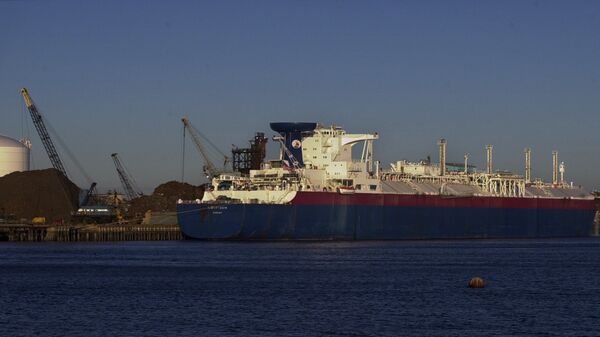 © AP Photo / Lawrence Jackson
Subscribe
International
India
Africa
Paris does not want to buy US-produced liquefied natural gas, citing it contains much shale gas which is produced using technologies banned in France. The situation plays in the hand of other gas suppliers, first of all Russia.

That’s All Gas: US LNG Exports Cannot Squeeze Russia From European Market
France is considering a ban on US shale gas right at a time when supplies of American liquefied natural gas (LNG) to Europe are ramping up, Reuters reported, citing French Energy and Environment Minister Segolene Royal.

According to the minister, the decision was made after it was discovered that up to 40 percent of US gas supplies to French companies Engie and EDF are shale gas. Shale gas is produced using hydraulic fracturing (fracking) which is banned in France due to environmental risks. Particularly, fracking involves injecting chemicals to create cracks in the deep-rock formations, thus creating contamination risks to underground water sources.

"I have asked the two companies why they weren't vigilant and I have also asked for an examination of a legal means for us to ban the import of shale gas," Royal said in parliament.

Earlier it was reported that Cheniere, the largest shale gas producer in the US, reached deals to send no less than 50 gas tankers to the port of Dunkirk. The first shipments are expected in summer 2016. According to L’Express, EDF signed a 20-year contract on the delivery of 770,000 tons (one billion cubic meters) of LNG each year.

Two-Thirds of US Natural Gas Comes From Fracking, Study Finds
It was also reported that Engie signed a deal to deliver at least 12 shipments of liquefied gas a year.

"This is 'environmental extremism,'" head of East European Gas Analysis Mikhail Korchemkin was quoted as saying by Gazeta.ru. "If those environmentalists find out that Gazprom uses fracking at its Markovskoye gas field they will call for banning Russian gas too."

According to the expert, the goal of the announcement is to "spark populist buzz in the media."

Head of the National Fund for Energy Security Konstantin Simonov noted that there is no law in France banning products produced with the use of fracking.

"I don’t think this may be done in favor of Russia because political tensions are still high," he suggested.

According to Simonov, the true reason behind the possible ban would be the pricing for US-made shale gas. Its current price is $6-6.5 per British thermal unit while Russian gas is much cheaper. This is because of falling prices in Gazprom’s long-term contract which bind gas pricing to crude prices.

At the same time, France could find legal grounds to ban shipments of American LNG despite the fact that contracts have already been signed, Nikolai Podlevskikh, a senior analyst at Zerich Capital Management, told Sputnik Radio.

The analyst also shared the assumption that the possible ban should be explained by other reasons, not by environmental concerns.

"Perhaps, this is a matter of big politics. Recently, French President [Francois Hollande] said his country was not ready for the Transatlantic Trade and Investment Partnership (TTIP) with the US. I think the issue of LNG supplies was brought up in the context of the TTIP talks," he said.

"France has long been protecting its market from genetically modified products from the US. Now, Paris is sending a signal that it can take asymmetric measures to protect its market and to call Washington for equal partnership," the analyst concluded.