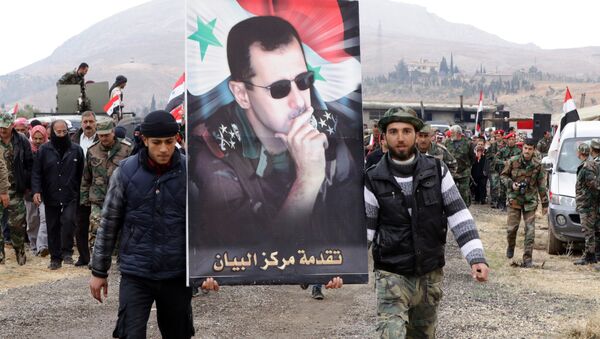 © AFP 2021 / LOUAI BESHARA
Subscribe
While the West continues its insistence that Syrian President Bashar al-Assad be removed from power, Iran’s top military official made assurances that the US and its allies will not get their wish.

On Thursday, Iranian Armed Forces Chief of Staff Major General Hassan Firouzabadi said that despite attempts by the United States to use the Syrian civil war to pursue its own agenda of removing the legitimate Syrian president from power, those attempts will fail.

"Despite US dreams and wishes, Bashar Assad will remain [in power] and warmongers will be disgraced by the victory of the Syrian nation," he said.

Firouzabadi added that the Syrian nation will emerge from the crisis victorious.

Raging on for nearly five years, the Syrian civil war has killed over 400,000 people, according to UN Special Envoy for Syria Staffan de Mistura. Over 12 million people have been displaced in what is described as the largest ongoing humanitarian crisis in the world.

While US and Russian governments have launched joint efforts to end the conflict, Washington has repeatedly undermined those efforts by funding opposition groups as part of a thinly-veiled attempt to oust Assad.

Sending military aid to the Free Syrian Army and other "moderate" opposition groups, the US government has also inadvertently armed radical extremist organizations. Aid has routinely fallen into the hands of Daesh, also known as IS/Islamic State, and al-Nusra Front, the Syrian al-Qaeda affiliate.

Moscow, on the other hand, has worked at the behest of the legitimate Syrian government, launching airstrikes against violent extremist groups.

The future of the country could hang on the ceasefire currently in place in the city of Aleppo.

"Radical groups have strong positions near Aleppo. They are not ready for a compromise with Assad," Russian political analyst Azhdar Kurtov said in an interview with Vzglyad. "Many of them also have foreign sponsors like Turkey and Saudi Arabia. Even if Moscow and Washington has the same positions, Ankara and Riyadh would continue to support terrorists."

"The war in Syria will end only after the warring parties are defeated. Since such a situation is impossible, the conflict will continue," he added.

000000
Popular comments
the warring parties to be defeated would then include the governments of us,turkey,saudi arabia.
michael
13 May 2016, 01:18 GMT3
000000
The trouble with the Americans having "wet" dreams about their regime changes is that they always forget to take their pants off when they have the wet dream.