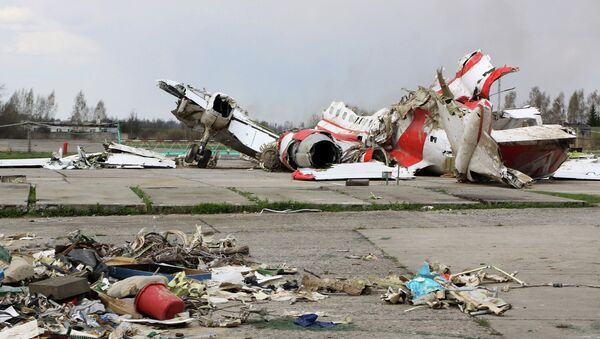 MOSCOW (Sputnik) — Poland’s Internal Security Agency (ABW) concealed part of the information from an investigation into the 2010 plane crash near Russia’s Smolensk, in which all passengers, including then-Polish President Lech Kaczynski, died, the minister in charge of the ABW, Mariusz Kaminski, said Wednesday.

Polish Claim That Smolensk Plane Crash Was 'Terror Attack' is 'Delusional'
On Wednesday, Poland's ruling Law and Justice (PiS) party is unveiling a report on the work of the previous government, which led the country from 2007 to 2015. The speeches of ministers are being broadcast live on Polish television.

According to Kaminski, the agency received images of the crash site from US intelligence two days after the crash and was obliged to hand them over to the prosecutor's office immediately, but this was only done 10 months later when the latter learned about the images from the US side.

Kaminski also said that the ABW did provide the authorities with information on a Russian citizen, who appealed to the Polish Embassy in Moscow in May 2010, saying that he had some information on the crash possibly being the result of an attack. The Polish side did not check this information and instead referred the man to the Russian Federal Security Service (FSB), the minister noted.

Will Poland Be the Next Chapter in the Political Crisis Plaguing Europe?
The plane carrying Kaczynski, his wife and a number of high-ranking officials crashed in heavy fog as it attempted to land at an airfield near the Russian city of Smolensk on April 10, 2010, killing all 96 passengers and crew on board. The Moscow-based Interstate Aviation Committee (IAC or MAK) said in a report that the crew’s decision not to route the plane to an alternative aerodrome was the direct cause of the crash.

In early February, the Polish Defense Ministry said that Warsaw would restart its investigation into the crash from the very beginning.