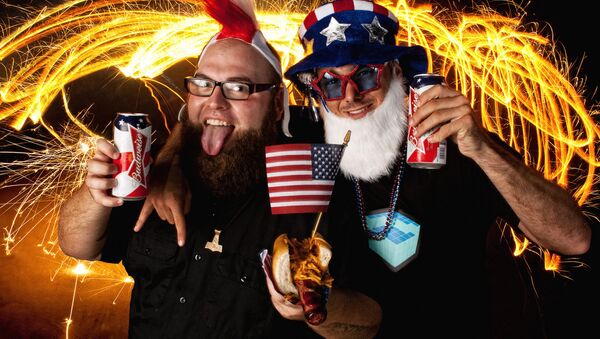 © Flickr / Robert Bejil
Subscribe
As the USA gears up for one of the most contentious and historic Presidential elections in living memory, it's not only politicians who are hoping to capitalize on increased levels of patriotism. Throughout the summer of 2016, Budweiser beer will be replacing its normal brand name with the word "America" on its 12 oz cans and bottles.

The "America" branding will of course coincide with this year's Rio Olympics, for which Budweiser is an official sponsor. It is also the 240th American Independence Day on July 4.

Here's to America the beautiful. Hold her high this summer. #ThisBudsForYou pic.twitter.com/puATIxT0Th

The new labelling will feature the de facto motto of the United States, "E Pluribum Unum" and lyrics from the famous folk song "This Land is Your Land" by Woody Guthrie, "from the redwood forest to the Gulf stream waters this land was made for you and me."

Quite what the renowned communist singer would have made of his lyrics being used to promote a multinational corporation however, is difficult to say.

This is not the first time Budweiser has used its branding to capitalize on US patriotism — last year, a limited edition design featured the statue of liberty, and they've been known to use the stars and stripes on their cans too.

A number of other popular brands have targeted the nationalist dollar over the years, most notably Coca-Cola, who've implemented a few patriotic packaging designs in various countries.

If Budweiser is now called "America", when do they make America great again?

One of the most famous examples of patriotic rebranding in the US though, wasn't implemented by any specific corporation, rather the cafeteria of the US Congress. Following France's opposition to the Iraq war in 2003, French Fries were actually renamed as "Freedom Fries" in certain restaurant chains, although the practice died out as support for the war in Iraq waned.

Wake me up when they change the name of America to Budweiser.

The new design will run from May 23 through to the election season in November, and will sit alongside a TV ad campaign entitled "America is in your hands."

000000
Popular comments
The cockroach of beer gets a makeover.