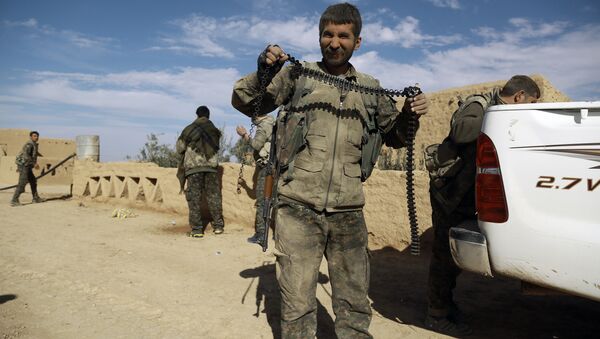 Damascus: Arrival of 150 US Soldiers in Syria 'Dangerous Invasion'
Troops and heavy weapons are being concentrated in the northern Syrian YPG-controlled canton of Kobani, in preparation for a major operation.

Speaking to Sputnik, Syrian Democratic Forces (SDF) spokesman Tajir Kobani said that the alliance is making preparations for a three-pronged attack on the city of Raqqa, the de-facto capital of Daesh's self-proclaimed caliphate.

"We will begin our offensive from three flanks simultaneously," Kobani explained. "The US and other members of the anti-terrorist coalition will provide us with air support and weapons in the course of the operation," he added. The alliance will make a push for the city from the recently liberated Tishrin dam, located to to Raqqa's northwest, and from two directions from the Hasakah province in the northeast.

According to the spokesman, the forces participating in the operation include Kurdish YPG self-defense units, Jaish al-Suvar, and other members of the SDF alliance, an eclectic collection of Kurdish, Arab, Assyrian, Armenian, Turkmen, Circassian and Chechen militias fighting against Daesh and al-Nusra.

"Raqqa's liberation," Kobani emphasized, "will be a serious blow to Daesh positions in Syria. We intend to liberate the people of Raqqa from the jihadists."