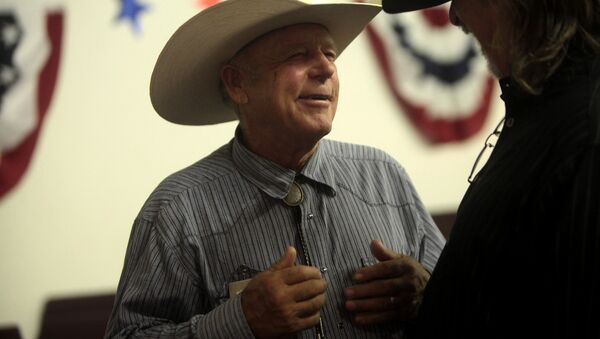 © Flickr / Gage Skidmore
Subscribe
Another citizen wilderness standoff may be imminent as a group of wildlife organizations have written to the US Bureau of Land Management (BLM), urging them to seize Cliven Bundy’s cattle, while the imprisoned rancher gears up to file a lawsuit against President Barack Obama.

FBI Under Investigation for Fatal Shooting in Oregon Militia Standoff
On Monday, a coalition of nine environmental groups wrote to the BLM to complain that, though Bundy has been imprisoned for three months, as many as 1,000 of his cattle are illegally grazing on Nevada lands containing a threatened species of tortoise.

“The BLM must not wait to act to protect the desert tortoise,” the groups urged in their letter, which also contained a study proving that livestock grazing causes tortoise populations to decline. “The cattle should be rounded up and removed from these public lands no later than summer 2016.”

Meanwhile, Bundy, who remains imprisoned in Oregon after attempting to visit his son’s failed occupation of a wildlife reserve in the state, is planning to file a complaint against the US President, Senate Minority Leader Harry Reid, his son, former Clark County Commission Chairman Rory Reid, and District Court Judge Gloria Navarro. The prisoner alleges that his constitutional rights were violated and seeks to be released from solitary confinement.

For many years, Bundy has put his cattle to graze on federal land in Nevada, refusing to recognize BLM authority of the territory. The pugnacious rancher has accumulated over $1 million in grazing fees, which remain unpaid.

Despite Bundy’s illegal actions, BLM has no plan to remove his cattle.

“Mr Bundy’s cattle continue to be in trespass. There are no plans for a gather at this time as we continue to cooperate with the Department of Justice on the ongoing legal matter,” agency spokesman Jeff Krauss told the Guardian.

In 2014, BLM officials arrived at Bundy’s ranch with the intention of seizing the animals, but were met with a large militia group in support of the rancher. The government chose to retire rather than risk unnecessary bloodshed, an act of compassion which emboldened anti-government groups across the nation.