All is Well at Sochi Airport After Broken Plane Fragment Found 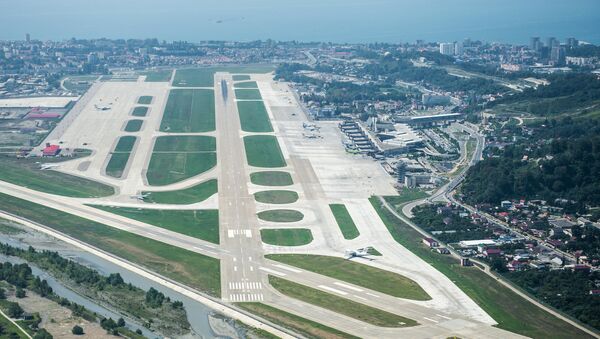 © Sputnik / Mihail Mokrushin
/
Go to the mediabank
Subscribe
International
India
Africa
The situation at several Russian airports has returned to normal after a fragment of an aircraft braking system was discovered on a runway in Sochi.

Russia
Swans and Bears: Russian Jet Bombers Steal the Show During Victory Parade
Earlier it was reported that a fragment of a braking disc was discovered on a runway at Sochi airport during a routine inspection. This unsettling find prompted them to immediately notify the local authorities.

The press service of a company responsible for managing the airports of Russia’s Krasnodar Region reported that the aircraft part was found sometime between 8:30 and 9:15 a.m. local time.

However, even though the emergency services of two airports in Moscow, as well as one in Yekaterinburg and one in Tyumen, were put on high alert ahead of the impending arrival of a potentially damaged airliner, the situation was resolved without incident.

"All outbound flights to Moscow, Yekaterinburg and Tyumen that took off during that time interval have safely landed at their destinations," Sochi Airport’s press service said, according to RIA Novosti.

Earlier it was reported that a fragment of a braking disc was discovered on a runway at Sochi Airport during a routine inspection. This unsettling find prompted the local authorities to immediately relay this information to all airports where planes using that runway for takeoff during that time period were heading.