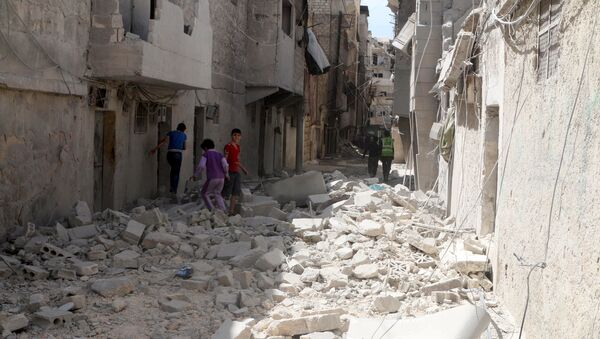 © REUTERS / Abdalrhman Ismail
Subscribe
The al-Nusra Front militant group has continued armed action in the Syrian city of Aleppo, trying to derail the “regime of silence,” the Russian reconciliation center said in an information bulletin on Monday.

MOSCOW (Sputnik) — Al-Nusra Front, outlawed in Russia, is one of the extremist groups that Syria government forces loyal to Syrian President Bashar Assad have been fighting since 2011, in addition to fighting numerous opposition factions in the country.

On Wednesday, Moscow and Washington agreed that the ceasefire in Syria should include the city of Aleppo. The "regime of silence" came into force on Thursday.

“According to citizens of the Aleppo province, more than 70 militants and 3 trucks with munitions have arrived in Anadan from Turkish territory in order to reinforce Jabhat al-Nusra formations,” the center added.