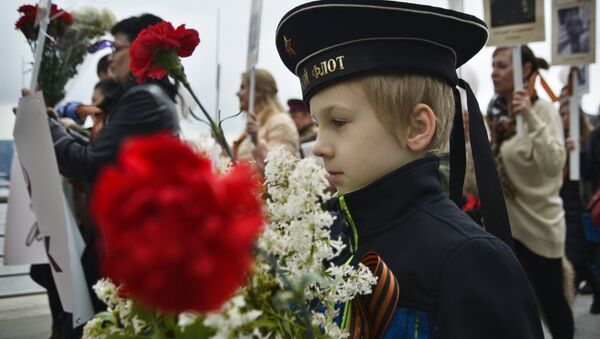 "Immortal regiment" march was held for the first time in Washington, DC on the eve of the Victory Day celebrations to commemorate the 71st anniversary of victory over the Nazi Germany in World War II.

Hundreds Take to Streets of Paris for 'Immortal Regiment' March on VE Day
WASHINGTON (Sputnik) – Hundreds of people participated in the "Immortal regiment" march in Washington, DC on the eve of the Victory Day celebrations to commemorate the 71st anniversary of victory over the Nazi Germany in World War II.

Washington hosted the Immortal Regiment for the very first time this year.

Yekaterina Hill, an organizer of the event in the US capital, told Sputnik that a lot more people came than the organizers had expected.

"I started preparing this event about three weeks ago through the Facebook page. We did not expect that so many people will join us. And I am so happy that so many have come with their children, parents and grandparents. This is a uniting event," Hill said.

Most people were holding the portraits of their relatives who participated in the WWII.

Yevgeniy Nosov and his wife Mrs. Nosova were carrying the photographs of Mrs. Nosova's parents held Leningrad's defense during the blockade.

"My mom and I survived, but my father was heavily wounded and died from the injuries," she told Sputnik. "It is so important for us that we were allowed to honor our parents today here in Washington."

Sergei Kurbassky held the photo of his father.

"I wanted to walk with him today, and showed people that my father was fighting in that war," Kurbassky told Sputnik.

First Ever 'Immortal Regiment' March Takes Place in Spain's Madrid
People marched down the streets of Washington from the White House to World War II Memorial where they laid flowers and wreaths.

The march was accompanied by the songs of the WWII period sung by the participants to the music played by the local Russian artists.