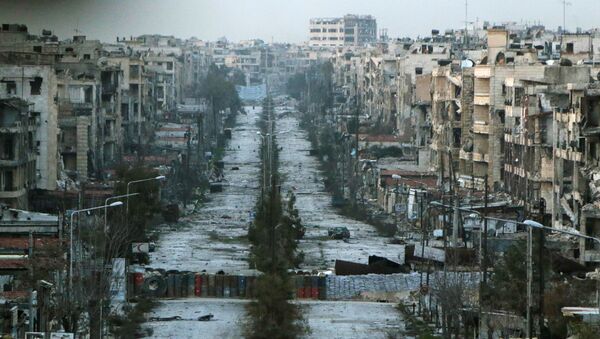 Aleppo Citizens Describe Real Situation on the Ground Following Truce
MOSCOW (Sputnik) — Al-Nusra Front jihadist group has continued fighting near the Syrian city of Aleppo, shelling its district and an airfield, the Russian reconciliation center said in an information bulletin on Saturday.

"Militants of Jabhat al-Nusra terrorist grouping have continued conducting warfare near Aleppo. Within last 24 hours, they have performed 2 shellings with multiple launch rocket systems against Sheikh Maqsood and al-Nairab airfield. Terrorists took efforts to launch offensive on Sheikh Maqsood from Ashrafiyah," the bulletin, posted by the Russian Defense Ministry, said.

The Russian reconciliation center also reported that five ceasefire violations were registered in Syria over the last 24 hours in the provinces of Aleppo and Latakia.

"The ceasefire has been observed in most provinces of the Syrian Arab Republic. Within last 24 hours, 5 ceasefire violations have been registered (Aleppo province – 3, Latakia –2)," the bulletin said.

000000
Popular comments
a map of the area would add to the article, for future reference.
michael
8 May 2016, 02:24 GMT1
000000
Since the road into Aleppo is still allowing arms in and since the surrounding countryside is exempt from the ceasefire it is time to cut off the supply of arms.