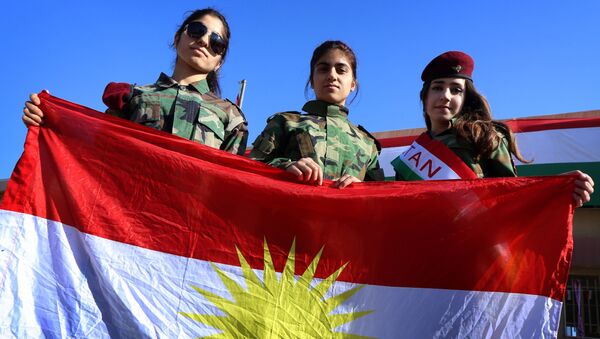 © AFP 2021 / SAFIN HAMED
Subscribe
Disenchanted with Baghdad and emboldened by their anti-Daesh successes on the battlefield, the Iraqi Kurds, including high-ranking political and military officials, appear to be making a renewed push for independence amid political turmoil.

In late April, Peshmerga leader Muhammad Haji Mahmoud, known as Kaka Hama, made a case for a referendum that is expected to be held later this year. Speaking before the Cambridge University Kurdish Society, he said that the vote should take place before Mosul, Daesh's stronghold in Iraq, is liberated and prior to the upcoming US presidential poll.

Kaka Hama: the #Kurds need to decide their own fate before #Mosul liberation and #US elections (1/2) #TwitterKurds

Kaka Hama: #Iraq consists of three countries on the ground, one cannot even travel from #Erbil to #Baghdad by car #TwitterKurds

Why US is Concerned About Yielding Its Key Ally to Russia
​On Friday, Mala Bakhtiar, a senior member of the ruling Patriotic Union of Kurdistan (PUK), called the referendum an "undisputed right" of the Iraqi Kurds.

Earlier this week, the Kurdish language news television network NRT News reported that the Kurdistan Democratic Party (KDP) urged local authorities to take "serious steps" towards holding the independence referendum. The KDP is led by Masoud Barzani, who has served as the president of Iraqi Kurdistan since 2005.

In March, Barzani confirmed that the vote would likely take place in October.

Both Masoud Barzani and Muhammad Haji Mahmoud emphasized that the vote will not automatically lead to independence, even if the majority of Iraqi Kurds back the move. "It is a card and a mandate in the Kurdish hands to negotiate it with the Iraqi government, the regional powers, and the West," the latter explained.

Barzani's son, Masrour Barzan, who serves as Chancellor of the Kurdistan Region Security Council, called Iraq "a conceptual failure" that has compelled different ethnicities "to share an uncertain future" although they have "little in common."

"It is time to acknowledge that the experiment has not worked. Iraq is a failed state, and our continued presence within it condemns us all to unending conflict and enmity," he wrote in an opinion piece for the Washington Post.

To remain invested in a state [Iraq] that has repeatedly failed is folly. Kurdistan has built foundations of a successful, prosperous state.

​Amicable divorce, Barzani argued, is the only option remaining on the table. An independent Kurdistan, in his opinion, will bring greater security and stability to the region plagued by sectarian violence. A sovereign nation will also be better positioned to tackle Daesh. In addition, it will gain access to international markets that would help to solve Kurdistan's financial troubles.

On Iraq, I explained: The mentality in Baghdad does not accept partnership. Iraq's falling apart; we've done what we can to hold it together

​Iraqi Kurdistan is an autonomous region in northern Iraq, well-represented in federal institutions.

Local authorities have flayed Baghdad for failing to deliver on its promise to transfer 17 percent of the national budget to the Kurds under an oil and profit-sharing deal. They have also been unhappy with Prime Minister Haidar al-Abadi's attempts to reshuffle his cabinet by establishing a government of technocrats.

000000
Popular comments
The first paragraph ("In late April...") is priceless; says it all in few words. The most I enjoy in sputnik are pictures, titles, subtitles, and first paragraphs. They always say it all.
elsa.zardini
7 May 2016, 16:40 GMT2
000000
I feel better that Sibel Edmonds shares my view of the Kurds shooting themselves in the foot. They often insist on what is worst for them. I attribute much of that to CIA/NATO infiltration. The main mission of the Kurds should be good relations with Russia and the non-NATO coalition. If the Kurds can't figure out that NATO is like deadly poison, there is nothing I can do to change that. I wish the best for them. But these pushes against the Iraqi and Syrian governments are very disruptive and destructive if they are even occurring. This could all be a lie and the Kurds don't have a renewed push for secession at all. It is hard to tell when Zio-Sputnik or the real Sputnik is reporting.
jas
7 May 2016, 17:18 GMT1
000000
Newsfeed
0
New firstOld first
loader
LIVE
Заголовок открываемого материала
Access to the chat has been blocked for violating the rules . You will be able to participate again through:∞. If you do not agree with the blocking, please use the feedback form
The discussion is closed. You can participate in the discussion within 24 hours after the publication of the article.
To participate in the discussion
log in or register
loader
Chats
Заголовок открываемого материала
Worldwide
InternationalEnglishEnglishMundoEspañolSpanish
Europe
DeutschlandDeutschGermanFranceFrançaisFrenchΕλλάδαΕλληνικάGreekItaliaItalianoItalianČeská republikaČeštinaCzechPolskaPolskiPolishСрбиjаСрпскиSerbianLatvijaLatviešuLatvianLietuvaLietuviųLithuanianMoldovaMoldoveneascăMoldavianБеларусьБеларускiBelarusian
Transcaucasia
ԱրմենիաՀայերենArmenianАҧсныАҧсышәалаAbkhazХуссар ИрыстонИронауОssetianსაქართველოქართულიGeorgianAzərbaycanАzərbaycancaAzerbaijani
Middle East
Sputnik عربيArabicArabicTürkiyeTürkçeTurkishSputnik ایرانPersianPersianSputnik افغانستانDariDari
Central Asia
ҚазақстанҚазақ тіліKazakhКыргызстанКыргызчаKyrgyzOʻzbekistonЎзбекчаUzbekТоҷикистонТоҷикӣTajik
East & Southeast Asia
Việt NamTiếng ViệtVietnamese日本日本語Japanese中国中文Chinese
South America
BrasilPortuguêsPortuguese
NewsfeedBreaking
02:53 GMTMaduro Calls EU Observers at Latest Venezuelan Elections ‘Delegation of Spies’
02:43 GMT'Keep Livin': Matthew McConaughey Decides Not to Run for Texas Governor
02:36 GMTOver 2,000 People Protest Against COVID-19 Measures in Prague - Reports
02:19 GMT'French Trump' & Possible Presidential Candidate Zemmour Spotted Showing Middle Finger to Protester
01:28 GMTMarket Bull Expects US Fed. Reserve to Lift Interest Rates Six Times til 2024 due to High Inflation
00:24 GMTRepublican Rep. Says Congress Leadership 'Needs to Change' as GOP Could Secure Southern Border
YesterdayFauci Tells Biden It Will Take 2 Weeks to Have Full Information on Omicron Strain
Yesterday‘Absolute Hubris’: Rand Paul Slams Fauci For Saying 'I Represent Science'
YesterdayRoger Stone Calls FBI 'Biden's Personal Gestapo' While Speaking of Jan. 6 Committee Subpoena
YesterdayJennifer Lopez Feels Her Reunion With Ben Affleck Is 'Truly Meant To Be,' Report Says
YesterdayUS Transport Sec Buttigieg Wriggles on Ridiculed 'Racist Roads' Comments
YesterdayNew Jersey School to Remove President Woodrow Wilson's Name Over Racism Legacy
YesterdayTrump's Super PAC to Hold Biggest Fundraiser Yet Amid Biden's Sinking Polls - Report
YesterdayFrance Blames UK for Channel Drownings for Being 'Too Attractive' to Migrants
YesterdayWHO: Data Insufficient to Conclude Omicron More Dangerous Than Delta
YesterdayUS Reportedly Sends Two Military Convoys to Syria Consisting of Over 100 Vehicles
YesterdayTaiwan Scrambles Jets to Fend Off 27 Chinese Military Aircraft
YesterdayBelarusian Security Council Says Kiev Stirring Up Migration Issue to Get Money From West
YesterdayPresident Ramaphosa Delivers Speech on South Africa's COVID Fight Amid Spread of Omicron Strain
YesterdaySouth African Doctor Says 'Mild' COVID-19 Variant Omicron Already 'Seeded' in UK