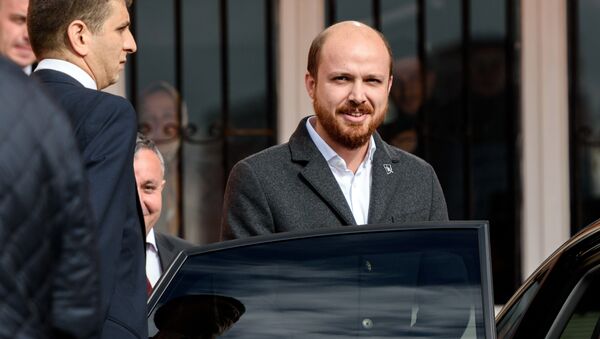 While Turkish president Recep Erdogan’s annual income stands at the modest level of €50,000 ($57,000), his children appear to walk in golden slippers. At the same time, there are no official statistics that appear to explain where all that money originates from, the German newspaper Bild reported.

New Scandal? The Erdogans Spotted Laundering Money in EU
According to the report, Erdogan’s children occupy luxurious villas and have businesses that are far from transparent. Bilal Erdogan, the Turkish leader’s younger son, for instance, has been suspected of several accounts of money laundering. He has been also spotted engaging in the 2013 corruption scandal along with his sister Esra, the paper notes.

Moreover, it was revealed last year that Bilal has long been covering up Turkish businessmen that close underground bargains with the Daesh extremist group with an annual value of up to $500 million. All attempts to investigate alleged crimes by the president’s son within Turkey had been “swept under the carpet," Aykut Erdogdu, member of opposition People's Democratic Party (HDP) told earlier Sputnik Turkiye.

Erdogan's Son Blocks Access to Websites Detailing His Criminal Connections
The Russian Defense Ministry published last December satellite images that laid bare oil smuggling from Daesh-controlled territories in Syria to Turkey. Despite the country’s establishment’s denial of the allegations of involvement in the dirty business, the trade went on until at least till last February, the RT investigation unveiled.

"In fact, Bilal Erdoğan is up to his neck in complicity with terrorism, but as long as his father holds office he will be immune from any judicial prosecution," Gursel Tekin HDP vice-chairman told Turkish journalists in August.

Now Recep Erdogan is looking into opportunities to expand both the financial and political influence of his “clan,” Bild noted. After the resignation of current prime-minister Ahmet Davutoglu, the president has started to promote for that post Minister of Transport Binali Yildirim or Energy Minister Berat Albayrak, who is Erdogan’s son-in-law. Albayak is convenient to Erdogan, as he has proven his loyalty multiple times.