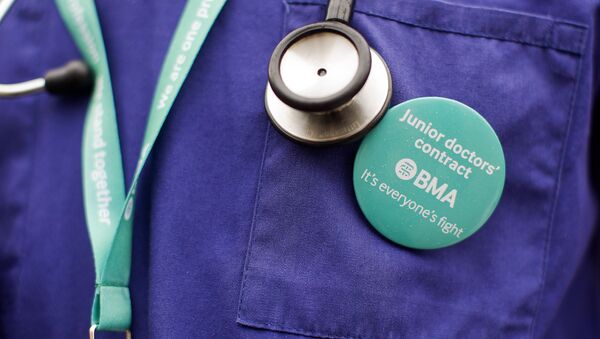 © AFP 2021 / Justin Tallis
Subscribe
The British Medical Association announced it would re-enter negotiations with the government on the issue of labour contracts for the junior doctors in England.

It's All Your Fault: UK Public Blame Gov't in Junior Doctors Dispute
MOSCOW (Sputnik) — The British Medical Association (BMA) announced Saturday it would re-enter negotiations with the government on the issue of labour contracts for the junior doctors in England who have staged several walkouts in recent months on the issue.

"The BMA has agreed to re-enter talks with the government on outstanding issues in the dispute, which include, but are not limited to, unsocial hours. Junior doctors’ concerns extend far beyond pay, and our principle in talks will be to deliver a fair contract that does not discriminate against women or any other group, one which addresses the recruitment and retention crisis in the NHS [National Health Service] and which provides the basis for delivering a world-class health service," chairman of BMA’s Junior Doctor Committee Johann Malawana said.

Britain's Health Secretary Jeremy Hunt announced plans in early 2016 to introduce a new employment contract for junior doctors in England under which doctors would be paid less for weekend shifts, sparking major protests in a number of cities.

The Department of Health initially refused to compromise, planning to impose the contracts against the junior doctors' will.