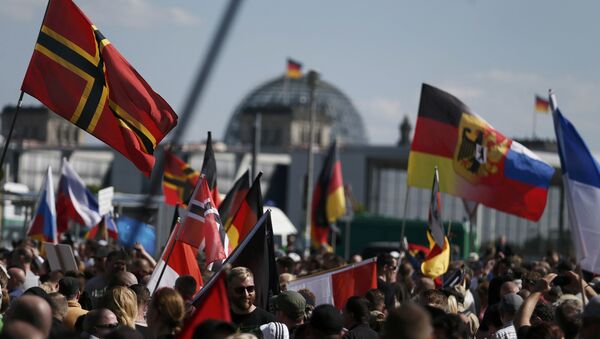 © REUTERS / Hannibal Hanschke
Subscribe
At least 13 police officers were injured in clashes with protesters in Berlin on Saturday, the local police said.

Thousands Take Part in Anti-Merkel Rally in Berlin
MOSCOW (Sputnik) – Earlier in the day, almost 2,000 people protested calling for Chancellor Angela Merkel to step down. A counter-demonstration also took place, with around 7,500 people rallying for tolerance.

"So far, our colleagues carried out more than 40 detentions… So far, 13 colleagues were reported injured. Three vehicles were set on fire," the central operations division of the Berlin police said on its Twitter account.

According to local media reports, come 1,700 policemen were deployed to ensure the rallies are carried out peacefully. Several activists managed to break through the police cordon, with law enforcers using tear gas.

The Merkel government has been repeatedly criticized for its open-door migration policy, as Europe is struggling to manage an unprecedented refugee crisis with hundreds of thousands fleeing war and violence in the Middle East and North Africa.