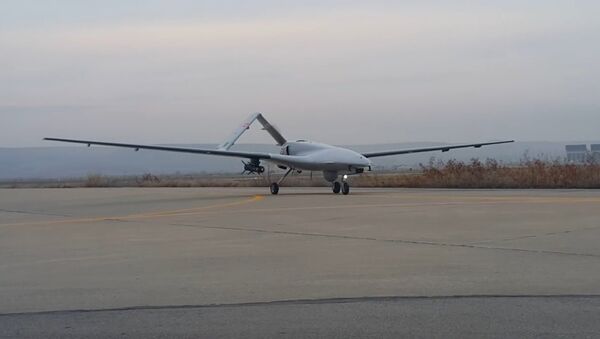 Since January, dozens of Turkish residents have been killed in cities along the Syrian border, victims of rocket attacks believed to have been carried out by Daesh, also known as IS/Islamic State. In an effort to counter these attacks, the Turkish military will fast-track two programs aimed at developing armed drones.

"The best method is to monitor the region [under ISIS’ control] and mobile threats, and to have capabilities to hit the threat at its origin…like armed drones," said Turkey’s chief procurement official, Ismail Demir, according to Defense News.

The acceleration has already resulted in the successful testing of the Bayraktar UAV at the end of the last month. The device uses smart missiles, known as MAM-L and MAM-Cs, with a maximum payload of 650 kilograms. The drone will soon include the Turkish-made BSI-101 signals intelligence (SIGINT) system, which will replace current American versions.

"We are so proud…with tears in our eyes," Demir tweeted following the Bayraktar’s first test.

The military is also working on an armed version of its Anka medium-altitude, long-endurance surveillance drone. With a payload of 200 kilograms, the UAV can operate at an altitude of 30,000 ft. for up to 24 hours.

The armed variant, known as the Anka S, will be feature satellite communication capabilities and will be delivered by Turkish Aerospace Industries by 2017.

In the meantime, Ankara is relying on American MQ-1 Predator drones to combat the extremist group. Flying out of Incirlik Air Base, the aircraft have taken out multiple Daesh targets this month, alone.

"We have very serious security problems in Kilis where children stay out of schools and people prefer to stay indoors. Storeowners are worried about this regular shelling and many companies have rolled back their investment activity there," Sakar said.

"This is by no means a coincidence because Kilis is a strategic town hosting an estimated 90,000 Syrian refugees – more than in any other place."

On Thursday, former-Turkish Prime Minister Ahmet Davutoglu indicated that Ankara would send ground troops into Syria to address the situation, but experts doubt this assertion.

"I think, no matter what, Turkey will not send its armed forces unilaterally. Turkey’s unilateral involvement in Syria without international backing is out of the question."

000000
Popular comments
leaving it a bit late to join the other developers...
michael
7 May 2016, 00:58 GMT
000000
Newsfeed
0
New firstOld first
loader
LIVE
Заголовок открываемого материала
Access to the chat has been blocked for violating the rules . You will be able to participate again through:∞. If you do not agree with the blocking, please use the feedback form
The discussion is closed. You can participate in the discussion within 24 hours after the publication of the article.
To participate in the discussion
log in or register
loader
Chats
Заголовок открываемого материала
Worldwide
InternationalEnglishEnglishMundoEspañolSpanish
Europe
DeutschlandDeutschGermanFranceFrançaisFrenchΕλλάδαΕλληνικάGreekItaliaItalianoItalianČeská republikaČeštinaCzechPolskaPolskiPolishСрбиjаСрпскиSerbianLatvijaLatviešuLatvianLietuvaLietuviųLithuanianMoldovaMoldoveneascăMoldavianБеларусьБеларускiBelarusian
Transcaucasia
ԱրմենիաՀայերենArmenianАҧсныАҧсышәалаAbkhazХуссар ИрыстонИронауОssetianსაქართველოქართულიGeorgianAzərbaycanАzərbaycancaAzerbaijani
Middle East
Sputnik عربيArabicArabicTürkiyeTürkçeTurkishSputnik ایرانPersianPersianSputnik افغانستانDariDari
Central Asia
ҚазақстанҚазақ тіліKazakhКыргызстанКыргызчаKyrgyzOʻzbekistonЎзбекчаUzbekТоҷикистонТоҷикӣTajik
East & Southeast Asia
Việt NamTiếng ViệtVietnamese日本日本語Japanese俄罗斯卫星通讯社中文（简体）Chinese (simplified)俄罗斯卫星通讯社中文（繁体）Chinese (traditional)
South America
BrasilPortuguêsPortuguese
NewsfeedBreaking
15:23 GMTRussian Gov't Allocates $60Mln to Produce Soyuz Spacecraft for Tourist Flights
15:17 GMTSyrian Kurdish Leader Discussed Turkish Attacks During Moscow Visit, SDC Says
15:07 GMTEU Commission Chief Announces Launch of Competitor to China’s Belt and Road
14:51 GMTEU Not Informed About New US, UK & Australia Alliance, Plans ‘to Assess Implications’
14:48 GMT'BJP's Politics Behind 96% Jump in Communal Riots in India', Says Opposition Congress
14:46 GMT‘No Friend of China’: As Raab Exits Stage Left, What Will UK Foreign Policy Look Like Under Truss?
14:34 GMTSouth African Child Maintenance Payments Delayed by Ransomware Attack
14:34 GMTEuropean Gas Futures Fall Below $750 Per 1,000 Cubic Meters
14:29 GMTIs the Age of the Car Over as Politicians Around Europe Declare War on the Motorist?
14:29 GMTMessage for India? AUKUS Announcement Sparks Debate About Relevance of Quad, Reliability of US
14:15 GMTBlack Market Business for Foreign Visas Skyrockets in Afghanistan, Reports Say
13:29 GMTSequoia National Park in California Closes Due to Massive Wildfire, Administration Says
13:28 GMTRussia Threatens to Take Measures Against US Over Interference in Elections, Foreign Ministry Says
13:28 GMTCricketer Virat Kohli Confirms He Will Step Down as India's T20I Captain After ICC T20 World Cup
13:22 GMTShell Touts Plans for One of Europe's Largest Biofuel Plants
13:16 GMTWomen's Average Salary in Saudi Arabia Has Exceeded That of Men for the First Time, Report Says
13:10 GMTNo More Words: Microsoft Allows Use of Facial Recognition or Fingerprints Instead of Password
12:50 GMTNew Zealand Being Left Out of AUKUS Shows Canberra, Wellington 'Going in Very Different Directions'
12:14 GMTBiden Went For Full Afghanistan Pullout Despite His Cabinet's Advice, Book Claims
12:04 GMTChina Plans to Launch Experimental Reactor That May Revolutionise Atomic Energy Industry