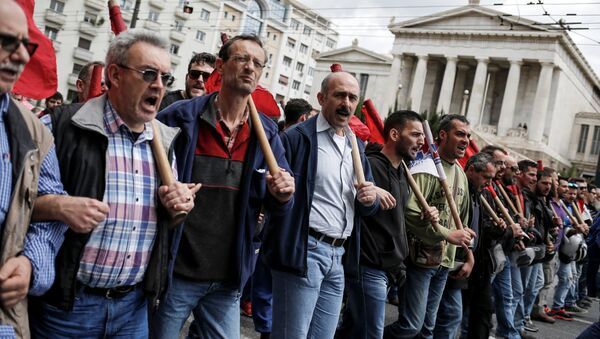 © REUTERS / Alkis Konstantinidis
Subscribe
The largest trade unions in Greece announced a 48 hour strike Friday (May 6) over the decision by the Greek parliament to fast-track a draft bill on pension and tax reforms that is to be voted on over the weekend.

The General Confederation of Employees of Greece (GSEE) — the largest trade union body representing 83 unions — and the civil servants' union federation ADEDY accused the government of a carrying out a "parliamentary coup" by speeding up the controversial legislation, demanded of it as part of the Greek bailout scheme.

"They will not take us by surprise. The government attempts like a criminal to finish the 'dirty work' quickly and has decided to bring the bill for a vote in parliament over the weekend," the strike committee said.

As part of its third bailout agreement with its creditors — the European Commission, the European Central Bank, (ECB) and the International Monetary Fund (IMF), known collectively as the 'Troika' — Greece has been forced to raise taxes, improve tax collection, cut state spending and impose severe changes to its state benefit system, in return for bailout money.

The third bailout austerity measures have proved deeply unpopular in Greece, with many demonstrations and rising street crime. The reforms included "streamlining the VAT system and broadening the tax base to increase revenue" and "up-front measures to improve long-term sustainability of the pension system as part of a comprehensive pension reform program".

The demands include passing a law immediately scrapping Greece's generous early retirement age and raising the statutory retirement age to 67 years or 62 years with 40 years of work, from 2022 and amendments to legislation in order to collect this year's payments of the hated ENFIA property tax.

Both the GSEE and the ADEDY union groups are urging all their members to oppose the new measures that include VAT hikes, higher taxes on fuel, alcohol and tobacco and additional pension cuts. They will be joined by members of the Greek seamen's' union, which is likely to affect ferry connections throughout Greece.

Other unions joining the strike include the national journalists' union federation POESY, municipal employees, the PPC power company union GENOP-DEH. The KKE-affiliated trade union faction PAME is planning three strike rallies over the weekend and Greek farmers are expected to down tools on Saturday ahead of rallies in Athens.