Yemen: 'Reckless' Attacks on Civilians Not Being Investigated - HRW 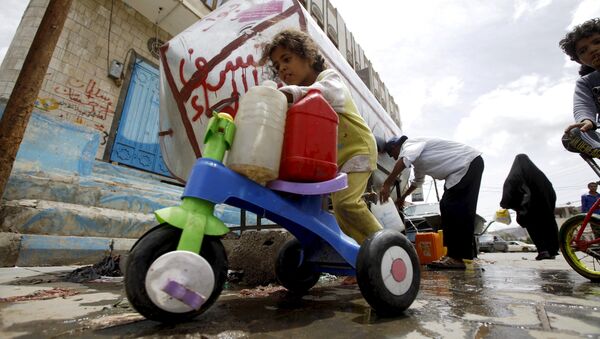 The airstrikes in Yemen are considered unlawful and Human Rights Watch (HRW) have called for the violations to be investigated.

The armed conflict has been characterized by numerous violations to the rules of war, many of them have not been investigated and there has been no redress for the victims of these attacks.

The Saudi Arabia-led coalition of nine Arab countries has carried out indiscriminate attacks, according to the HRW report, titled 'Yemen: War Crimes Not Addressed'.

These attacks have included airstrikes against residential neighborhoods, markets and other areas where civilians reside.

HRW have documented several testimonies within their report from civilians who have suffered due to the attacks. On February 9th at around 9pm, an airstrike hit a home in the Maiyad neighborhood, killing a family of five, including a woman and her three children.

"The reality is one of ongoing, large-scale violations by the Saudis in Yemen" @mephamd https://t.co/04zbJTdpbM pic.twitter.com/ZwkiGBxbwt

Mahdi Muhammad Abdullah Maiyad, 40, a neighbor, said that he was walking in the area at the time of the strike:

Belkis Wille, a research with HRW said the group are calling for the attacks to be investigated, both past and present.

"The airstrikes we have documented have been unlawfully indiscriminate or disproportionate. Individuals who commit serious violations of the laws of war with criminal intent — that is, deliberately or recklessly — may be prosecuted for war crimes. We have seen attacks that appear to have been carried out exceedingly recklessly, like the March 15th bombing of Mastaba market at noon, killing at least 97 civilians," Wille told Sputnik.

As #YemenCrisis rages on, people are desperate for food & water — hear their accounts https://t.co/H3EiHsRkmd #Yemen

The call for the attacks to be investigated has been blocked by Saudi Arabia and other Arab countries have effectively stopped an effort led by the Netherlands to create an international investigative mechanism.

"We and others were pushing for the Human Rights Council to create this commission during its September 2015 session, but unfortunately Saudi Arabia blocked those efforts. Instead, also in September, President Abdu Rabu Mansour Hadi of Yemen established a national commission to investigate violations of human rights and the laws of war. According to individuals close to the work of the national commission, it has taken no tangible steps to conduct investigations, nor has it revealed any working methods or plans yet," Wille said.

In addition to this the HRW are unable to bypass the national system:

"Because of the existence of the Yemen commission, the Human Rights Council members think it is too soon to establish a new, international mechanism, and bypass the national one. So at the moment, there is no willingness to create something at the international level."

Joe Stork Deputy Middle East director at HRW said it is crucial for all atrocities to be investigated, both past and present, otherwise the peace process will suffer.

"Yemen's failed transition, and the situation we find ourselves in today is largely a result of the political powers, both international and national, choosing to relegate transitional justice to the back burner and leave the grievances of generations of Yemenis unaddressed by allowing former President Saleh to remain in Yemen as head of the most powerful political party and in de facto control of the military, with complete immunity for all of his previous abuses. I hope that the country's political elite have learned one painful lesson over the last year and a half — prioritizing peace over justice does not lead to a sustainable, lasting peace. Instead it invites instability and strife," Wille said.

Yemen Crisis: UK 'Burying Its Head in the Sand' Over Saudi Arms Sales
The prospect of long term peace in Yemen seems very slim and HRW do have concerns that stability is a long way off.

"My biggest concern is that the parties at the table in Kuwait do not represent all of the sides in Yemen. For example, one of the very important political parties, with much popular support, is Islah. Islah is not participating in the talks in Kuwait, and if the party disagrees with the outcome of the talks, that does not bode well for a stable peace agreement that all sides adhere to on the ground."