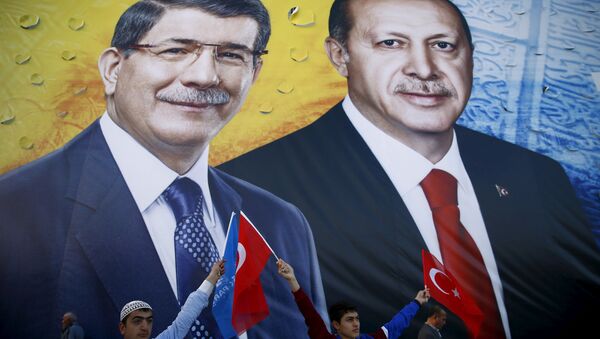 © REUTERS / Umit Bektas
Subscribe
Divisions between Turkish President Recep Tayyip Erdogan and his Prime Minister Ahmet Davutoglu have hit new lows as Davutoglu resigns and the country descends into political turmoil that threatens relations with the EU and further instability in neighboring Syria.

Erdogan has come in for severe criticism over his increasingly hardline approach to human rights, free press and his treatment of refugees — many of whom have fled Syria. He is pushing his agenda for accession into the European Union while at the same time fighting the Kurds in south east Turkey and coming under fire from Daesh, also known as ISIL, over the Turkish border in Syria. 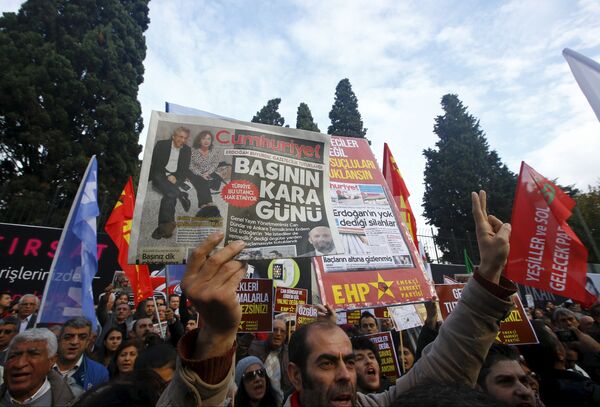 A demonstrator holds newspaper read "Black day of the press" during a protest outside the Cumhuriyet newspaper in Istanbul, Turkey, November 27, 2015
© REUTERS / Osman Orsal

Prime Minister Davutoglu said Turkey is ready to send ground forces into Syria to tackle Islamic State militants if need be, as two more rockets fired by the group struck a border town.

EU Commission Backs Turkey Visa-Free Travel Amid Terrorist Cautions
Erdogan also said Turkey would respond to all rockets fired by Islamic State and vowed that the jihadists would suffer greater losses if they continued their aggression.

However, any Turkish ground forces in Syria could prove diplomatically difficult, as Turkey is a NATO member. Although a US-led alliance — including many NATO forces — is carrying out aerial attacks, it has strayed from putting boots on the ground.

Divisions between President Tayyip Erdogan and his successor Davutoglu, whom he appointed in 2014, have emerged publicly in recent weeks over issues ranging from relations with Europe to the detention of government critics, hitting investor sentiment. That could trigger a stand-off within NATO, which could see Erdogan demanding support from his NATO allies.

However, despite unanimity over the possibility of sending in ground forces into Syria, Erdogan and Davutoglu are at odds over relations with Europe and the country's economy. On Europe, Davutoglu championed the cause for via-free access to EU states as part of the EU-Tukey migrant agreement. This requires a major series of compromises on human rights, refugee humanitarian aid and press freedom.

Monarchy? Erdogan Might Replace Davutoglu With His Son-in-Law
Erdogan, however, says the visa-free deal is not as important as Davutoglu suggests and continues to crack down on independent media, and opposition supporters. The split between the pair could have a devastating effect on the EU-Turkey migrant agreement, which could — if it fails — precipitate another mass movement of people through Turkey into Europe, exacerbating an already dangerous situation.

With Davutoglu, effectively, sacked by Erdogan, the president is consolidating his grip over Turkey, which many in Europe fear could destabilize the region. Many point to Erdogan's poor record on human rights, with Amnesty International saying the outbreak of violence between the Kurdistan Workers' Party (PKK) and the Turkish armed forces in July 2015 continues, while the media face unprecedented pressure from the government. 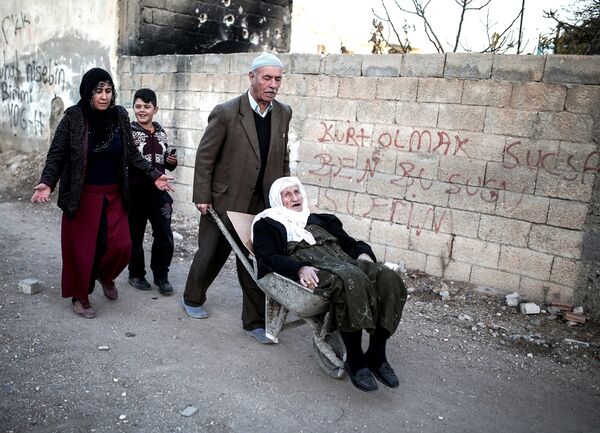 A man wheels a sick person in a wheelbarrow through the barricades set up by the militants of the Kurdistan Workers' Party, or PKK, in Nusaybin, Turkey, Thursday, Dec. 24, 2015.
© AP Photo / Cagdas Erdogan

With Davutoglu gone, Turkey faces a politically uncertain future. Its relationship with NATO — already under strain — could worsen with the threat of ground troops in Syria and the controversial EU-Turkey deal is now teetering on failure, exploding the migrant crisis once again and destabilizing the region.