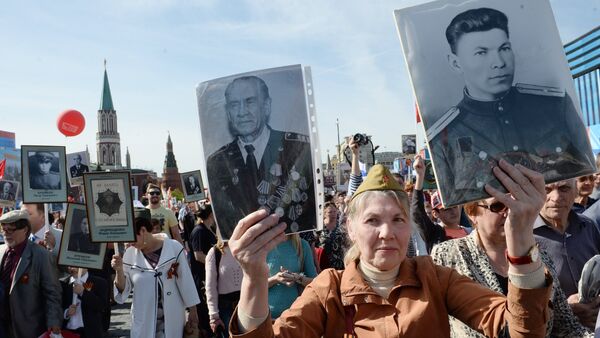 © Photo : Host photo agency
/
Go to the photo bank
Subscribe
The 2016 Immortal Regiment march honoring Victory Day will be held for the first time in Switzerland this year, the procession’s organizer said Thursday.

GENEVA (Sputnik) – The Immortal Regiment is a patriotic initiative that commemorates those who fought against Nazi Germany during World War II in marches held across Russia and other countries on May 9, celebrated as Victory Day in Russia and the former Soviet republics. During the marches, people carry photographs of their ancestors who participated in the war.

"We remember, and we would like that the heroism of the Russian soldiers would be remembered not only in Switzerland, but in all European countries where hundreds of thousands of Soviet soldiers perished on the battlefields," Svetlana Konev told RIA Novosti.

Konev, who founded the online guide and forum for Russian expats in Switzerland "Ladoshki," said the march emerged from an online drive when the number of contributed war veterans’ photographs and their stories exceeded expectations.

She said, despite the difficulty of organizing a full-scale march in the neutral confederation of Switzerland, the Immortal Regiment planned to gather in one of the largest Swiss cemeteries of Hoernli in Basel where the Russian Embassy lays wreaths at the grave of the fallen Soviet soldiers every year.

Nobody is Forgotten: 'Immortal Regiment' Marches Across Russia
In four months of preparing for the event, Konev said she gathered photographs and stories of World War II frontline soldiers from about 60 people, with contributions continuing to roll in in the run-up to the event.

Some 12 million people participated in the 2015 Immortal Regiment march throughout Russia, with Russian President Vladimir Putin joining a column of people carrying portraits of their relatives who fought in the Great Patriotic War of 1941-1945 in Moscow.

This year, Vienna and at least nine US cities, including New York City and San Francisco, plan to hold the Immortal Regiment march.