Scotland Votes: Are Scots Ready to Secede if Britain Exits the EU? 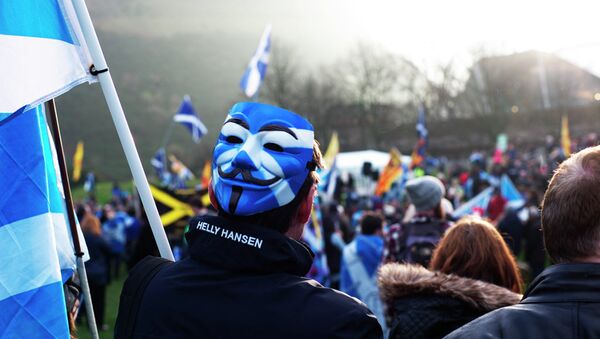 The Independence effort advanced by the popular Scottish National Party may reemerge in 2016 with the SNP expected to score an overwhelming victory with voters once again looking for an alternative to the Westminster austerity.

On Thursday, Scottish voters head to the polls for the 2016 parliamentary elections. The leading Scottish National Party (SNP) expects to dominate, growing in popularity following the narrow defeat of its Scottish Independence referendum two years ago.

The coalition has garnered momentum in recent years, adopting social democratic policies including free college and healthcare, and SNP’s brand is increasingly interwoven with the popular hope for greater autonomy, if not full independence, from the UK.

As voters charge forward in support of SNP, the party openly suggests that a resounding victory on Thursday night will breathe new life into the move for an independent Scotland.

What began as a whisper may soon emerge as a roar, as voters increasingly reject austerity measures imposed by the Conservatives in Westminster. The roaring may reach a fever pitch if British voters choose to leave the EU, a position unpopular among Scots.

Loud & Clear’s Brian Becker sat down on Wednesday with Glasgow-based journalist Liam O’Hare to discuss whether Thursday’s parliamentary vote may be the prologue to a fracturing of Great Britain.

​​What can we expect from today’s election?

"I think that we can almost definitely expect another SNP government," said O’Hare. "They have led for the past two governments in Scotland and they are even more popular now than they have been over the past few years in light of the referendum on independence that has consolidated a lot of support. There is no question that Nicola Sturgeon will once again be the First Minister."

How has the 2014 Scottish Independence vote impacted SNP’s popularity?

"The 45% of people who backed independence has not changed their mind and the national question, whether to break from Britain remains dominant in Scotland," explained O’Hare. "There are a lot of people in Scotland who want to see a second referendum as soon as possible. They want a political party that will stand up for the Scottish people’s interest and that will be a vehicle for independence in light of the broken promises from Westminster."

"Since the defeat of the independence referendum in 2014 there has been another conservative government at Westminster that very few people in Scotland voted for," O’Hare continued. "So the direction of travel in terms of the British state, the issue of Brexit and the potential break from the EU has further accelerated the need for a second referendum."

What else drives the growing electoral popularity of SNP?

O’Hare explained that, in addition to garnering support from the growing ranks of Scots who support independence, the SNP has also won wide-ranging support for their positions in favor of free college and free healthcare. “SNP started as a center-right party in many people’s eyes, but following the demise of Scottish Labour they absorbed that party’s platform, which is much like the one Bernie Sanders is supporting in the United States.”

"That is not to say that SNP are radicals when it comes to economic policies," noted O’Hare. "Other groups like RISE, a left-wing alliance, have been very critical of SNP, saying they need to go farther to bring about changes needed in Scotland, but the majority of people in Scotland trust the SNP on the core issues."

US Vows to Continue Operations in Hormuz Straight Despite Iran's Threat

A British vote to leave the EU may push Scotland to secede, but isn’t the Left involved in that effort?

O’Hare explained that the far-right Brexit forces continue to drown out the legitimate concerns of left-wing Lexit supporters. British media, which represents the voice of those in favor of staying in the EU, frames the debate along the lines of xenophobia and the refugee crisis, by giving bigoted far-right groups more coverage as a means to delegitimize those who want to exit an arrangement seen as economically and culturally unhealthful for the northern nation.

"The Left has been on the fringes of the European debate that is dominated not by a sense of people power but more of a national power, so in terms of the debate that has been thrusted upon the people, the left is almost nowhere on it with Labour leader Jeremy Corbyn now coming up with arguments to stay in the EU despite opposing it," explained O’Hare. "It is a debate that is not conducive to the left in Britain, but that is where the media has pushed the debate and where it is heading unfortunately."