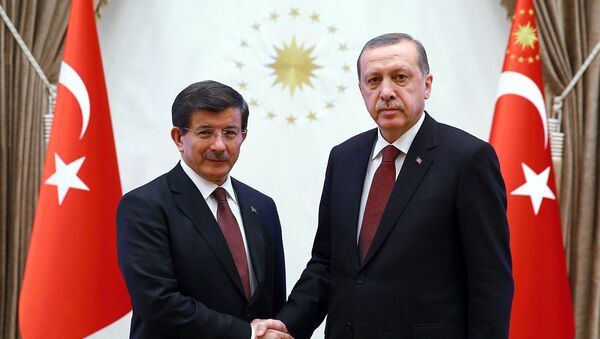 © AFP 2023 / TURKISH PRESIDENTIAL PRESS OFFICE / KAYHAN OZER
Subscribe
International
India
Africa
In what could be a shocking display of nepotism and a display of his deep lust for absolute power, Edrogan might, with the resignation of Turkish Prime Minister Ahmet Davutoglu consider one of his own as candidate for the position of the new government's leader.

Albayrak is the most likely candidate, as he is the President's son-in-law. As a family member he enjoys the trust of Erdogan, and therefore is more likely to be appointed for this position, German newspaper Deutsche Wirtschafts Nachrichten (DWN) reported.

According to German magazine Focus Online, the reason for Davutoglu's possible resignation is a secret power struggle between him and Erdogan. While Erdogan seeks to introduce an executive presidency instead of the current parliamentary system, Davutoglu has repeatedly opposed these plans as such amendments to the constitution would give Erdogan almost unlimited power.

"Erdogan's personnel policy is characterized by massive distrust to all. Even close allies feel that," DWN wrote.

The appointment of Albayrak would mean that Erdogan would have a loyal head of government who wouldn't criticize his actions. Moreover, the appointment of the current Energy Minister as the government's leader would also be beneficial for the whole of Erdogan's family, and especially for his son Bilal.

Earlier, Bilal Erdogan was repeatedly said to be actively involved in illegal oil smuggling from Daesh-held territories in Syria and Iraq. In particular, the president's son, who is the principal owner of BMZ Group Denizcilik, was transporting stolen oil to Asia and Israel, a former intelligence official said.