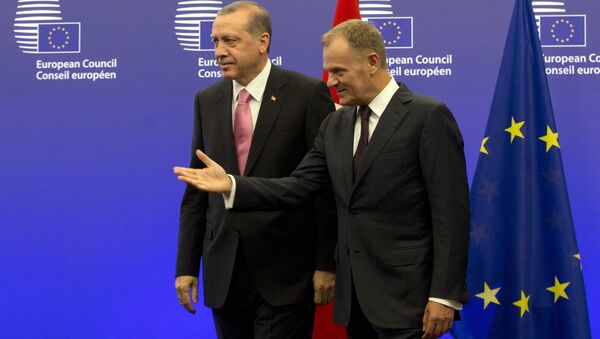 The European Commission backed a plan to allow Turkish citizens to travel freely around the Schengen countries if Ankara fulfills all 72 conditions put forward by the EU government. Janice Atkinson, a member of the European Parliament, representing South East England, told Radio Sputnik that the agreement with Ankara would badly affect EU citizens.

“What this does is it allows 77 million Turks access to the European Union. We can’t cope with the migrants that we have got right now. We have high unemployment in an awful lot of countries. There is youth unemployment in about 50% in Greece, across Portugal and Spain,” Janice Atkinson told Sputnik.

Discussing the plans to allow Turkish citizens to come to the EU, Atkinson said, “My group, myself and a lot of people in the UK feel that they don’t have western values, they don’t have gender equality, and their human rights record is absolutely appalling.”

She further said, “It all just comes down to the EU taking blackmail from Turkey because they can’t control their own borders so we have just given over 6 billion pounds worth of euros to Erdogan to do as he pleases and we know that he supports some form of terrorism, he is bombing his own people in the north of the country with the Kurds.”

“We are doing this dirty blackmail deal with him because we can’t control our own borders.”

Atkinson spoke about the upcoming polls on June 23 and how the current events may push more people to vote for exiting the European Union.

“This is really the tipping deal but it is not just Turkey that we are talking about. There is also Kosovo which many countries do not recognize, there’s Georgia and Moldova. There is an extra 150 million people that have access to the borders; we can’t control our borders. In Britain we can’t control people from Romania and Bulgaria.”

Further talking about Britain, Atkinson brought up the issues of infrastructure and demographics of housing foreign people and paying them wages.

“We are a small country with a rapidly rising population. We can’t accommodate them in our national health service. Schools can’t cope with the amounts of people that have settled here from the European Union so how are we going to cope with 77 million Turkish and 50 to 60 million people from other states. This is a sort of marginal imperialism that we are seeing again.”

She further spoke about how the British tax payers pay taxes that go to other countries to subsidize their lifestyle.

The agreement for visa-free travel between Turkey and the EU was included in a deal agreed in November as part of the EU's solution to the refugee crisis.

Why Merkel is Letting Erdogan 'Make Fool of Her'
However, the EU government and the European Parliament still have to approve visa-free travel for Turkey. Moreover, to be eligible for the deal, Turkey has to fulfill 72 conditions.

Ankara has successfully met 58 of these conditions— and if it succeeds, Turkish citizens will be able to visit Europe without a visa and stay for up to 180 days a year.

Once all 72 conditions have been met, Turkey can apply for EU membership which has been a long-time ambition for the country.

Ankara has successfully met 58 and if it succeeds, Turkish citizens will be able to visit Europe without a visa and stay for up to 180 days a year.
Janice Atkinson, a member of the European Parliament, representing South East England, who’s also vice president of a political group in the European Parliament called Europe of Nations and Freedom, told Radio Sputnik that the agreement with Ankara would badly affect EU citizens.