How Washington Will Use the TTIP to Ruin the European Economy 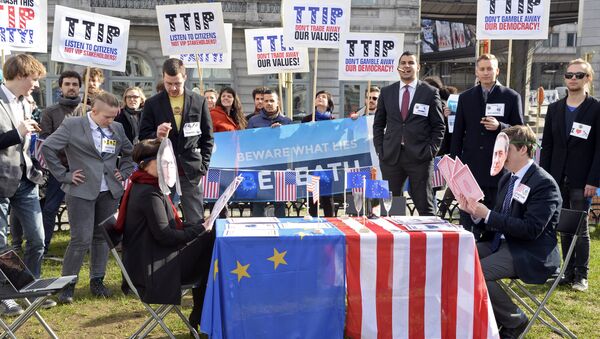 Washington is continuing to pressure European leaders to sign the Transatlantic Trade and Investment Partnership (TTIP) by the end of the year. However, the EU has resisted due to fears that some sectors of its economy would not be able to compete with the US economy.

France to Reject EU-US Trade Accord at Current Stage of TTIP Talks
The US has mounted pressure on Brussels during recent talks on the Transatlantic Trade and Investment Partnership, the German newspaper Suddeutsche Zeitung reported.

According to leaked confidential documents, the EU would have to significantly decrease social, legal and environmental standards to open European markets for US-made products.

Washington is almost blackmailing the bloc to make concessions, the article read. For instance, the US has threatened to reduce imports of European cars if Brussels rejects to buy more US-made agricultural products.

What is more, according to the papers, the US plans to abandon the European principle according to which foods are free to sell only if they are safe for people and environment. As a result, genetically modified products and plants would enter the European market, the newspaper reported.

Leaked TTIP Trade Deal Reveals Environmental Sell-Out - US Advocacy Group
Nevertheless, the full text of the upcoming agreement between the US and European countries has not been made public yet. The German government has only one printed copy of the document and it is strictly prohibited to make additional copies of the document.

The agreement would be of colossal importance if signed. It is expected to create a free trade and capital zone accounting for nearly 50 percent of global GDP.

The sealed-off reading room at the German Economy Ministry opened on January 29, 2016, several years after the talks on the TTIP started. Previously, German officials could read the text at the US Embassy in Berlin.

It is obvious that only a small number of European politicians and officials know the details and nuances of the agreement.

On April 24, President Barack Obama arrived in Hannover and joined German Chancellor Angela Merkel to open the 2016 Hannover Messe Trade Fair. He spoke to a number of German and European officials and businessmen, promoting the TTIP deal.

Particularly, Obama said that the agreement would eliminate tariff barriers, facilitate procedures and regulations as well as make trade easier for everyone, especially small companies.

According to the president, finally the partnership would result in economic growth and create new jobs both in the US and the European Union.

However, many Europeans are concerned about what the deal really is and what consequences it will have. For example, eliminating customs tariffs and barriers would result in cheap US-made agricultural products flooding European markets. This would destroy a number of European farming companies.

Many skeptics say that Europe will not gain benefits from the TTIP deal with the US. The competitiveness capabilities of US companies are higher than in Europe. Corporate taxes and labor costs are lower in the US. What is more, US bureaucratic barriers and ecological norms are easier to defend against litigation.

EU-US Controversy on TTIP Deal 'Greater Than Acknowledged' by Brussels
The 2015 Doing Business index ranked the US seventh. Only two European countries – Denmark and Britain – were ranked higher, third and sixth relatively. Such major economies like Germany and France were ranked 15th and 27th relatively.

At the same time, German major industrial corporations may benefit from the deal with Washington. Their products are traditionally high in demand in the US. In 2015, trade between the US and Germany increased by nearly 20 percent, to €173.2 billion. The US is now Germany’s biggest trade partner.