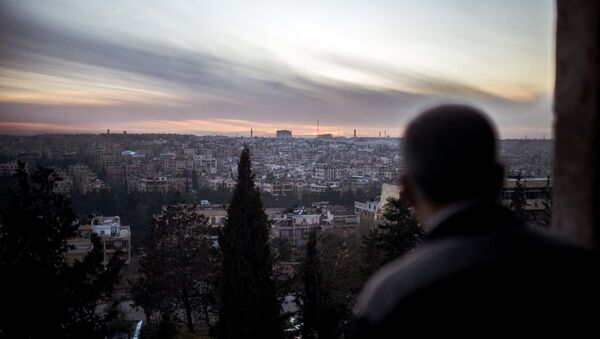 © Sputnik / Iliya Pitalev
/
Go to the mediabank
Subscribe
International
India
Africa
The Free Syrian Army says there are no areas in the suburbs of the Syrian city of Aleppo that are under the control of the al-Nusra Front.

Al-Nusra Front Continues Attacks in Northwestern Aleppo
DUBAI (Sputnik) — The Free Syrian Army (FSA) says there are no areas in the suburbs of the Syrian city of Aleppo that are under the control of the Jabhat al-Nusra (al-Nusra Front) radical group.

On Wednesday, the Russian center for Syrian reconciliation at the Hmeimim airbase reported that al-Nusra Front militants were carrying out attacks in northwestern parts of Aleppo. According to the reconciliation center, the attacks have led to casualties and injuries among civilians.

The US State Department acknowledged at the end of April that al-Nusra Front does control parts of Aleppo, saying that airstrikes on the terrorist group in that area are not violations of the ceasefire agreement.

Syria has been mired in civil war since 2011, with government forces loyal to Syrian President Bashar Assad fighting numerous opposition factions and extremist groups, such as the Islamic State (ISIL, also known as Daesh) and al-Nusra Front.