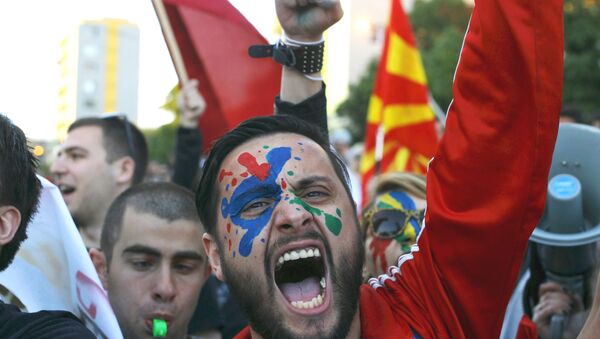 © REUTERS / OgnenTeofilovski
Subscribe
Anti and pro-government protests have resumed in Macedonia ahead of elections in June described by the country's President Gjorge Ivanov as the beginning of a "new chapter" for the country - but opposed by Social Democrats, SDSM, who are demanding they should be postponed.

The recordings allegedly imply that the government rigged the election, the justice system and the media and colluded in the cover-up of the murder of a man by a police officer, whilst 20,000 Macedonian citizens had their phone conversations taped. 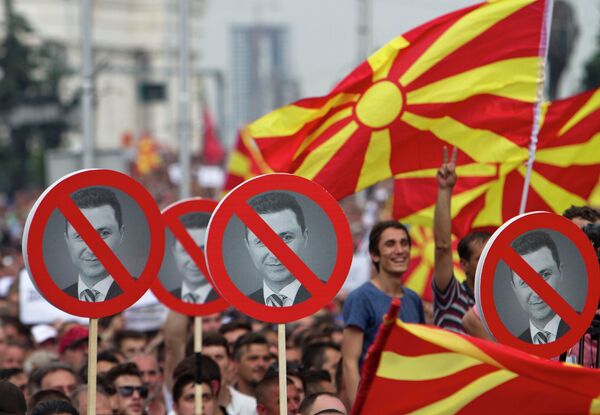 Rival protest camps were erected outside government buildings in the capital Skopje — and remain the scene for violent clashes, as well as peaceful demonstrations between anti and pro-government supporters.

Former PM Nikola Gruevski says the surveillance tapes were "fabricated" to destabilize the country and subsequent anti-government movements are supported by a US and EU-led agenda.

The investigation into the alleged wiretapping was dropped in April, following an announcement by Macedonian President Gjorge Ivanov that he would end the probe into 56 officials.

The EU and US wants President Ivanov to withdraw his decision to end the wiretapping investigation, led by the Special Prosecution, which was formed as part of an EU deal at the height of the crisis last summer. Ivanov however, stands firm by his decision.

"I made a decision that was exclusively in the interest of the state and the citizens of the Republic of Macedonia. Following all the reactions, back then and now, I remain firmly convinced that this decision will help in overcoming the political crisis and reducing the tensions among political opponents," Ivanov said.

Rival protests have continued ever since, stopping over Orthodox Easter, but resuming once again on the streets of Skopje.

International think tank, the International Crisis Group said: "In April the political crisis worsened, prompting widespread domestic and international criticism and days of protests, as opposition Social Democrats on April 6 announced the party would boycott the June 5 early elections due to failure to implement reforms to media and cleaning up of the electoral roll."

However, during his defense of the decision to halt the Special Prosecution, President Gjorge Ivanov said:

"What the citizens of the Republic of Macedonia expect from political parties is their internal filtration and promotion of new faces on the political scene in the Republic of Macedonia… The purpose of the decision is for it to serve as guarantee that until the day of elections, political parties and their supporters, the work of institutions and activity of the international community representatives, will not be abused and shall not influence the electoral process.

"I expect that the elections called for June 5 will be an introduction to a new chapter for the Republic of Macedonia," the President said.

Greek Migration Minister Apologizes for 'Macedonia' Mistake
Macedonia is referred to as the Former Yugoslav Republic of Macedonia (FYROM) by the United Nations and the European Union.

But Greece believes Macedonia stole its name from an ancient Greek province south of the border and has requested that the UN General Assembly refer to the country as the Republic of Macedonia.

FYROM has been a candidate for accession to the EU since 2005; but Greece has blocked Macedonian membership of NATO and EU until the "Macedonian Name Dispute" is resolved.