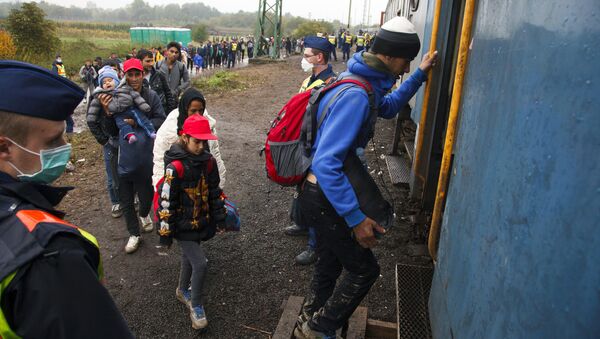 © AFP 2021 / HANNA SONIA
Subscribe
The proposal that could pave the way for fines being imposed on European Union member states for not accepting migrants according to the previously agreed quota scheme is unacceptable, a non-aligned member of the European Parliament from Hungary told Sputnik on Wednesday.

Pay-Not-to-Play: EU Countries Face Charge for Keeping Migrants Out
MOSCOW (Sputnik) – Earlier in the day, the European Commission tabled a proposal under which a EU country would face a 250,000 euro ($287,000) penalty for each EU-approved refugee it refused to admit.

"For my part, I found the decision unacceptable. This is a kind of blackmail by the Commission, which intends to force the reception of migrants," Zoltan Balczo said, adding that Budapest "cannot be forced to receive migrants who are totally unsuitable for integration."

The Hungarian and Polish foreign ministers slammed the EU plan to punish member states for not accepting their quota of refugees, with Hungary's Foreign Minister Peter Szijjarto calling it "blackmail" and his Polish counterpart Witold Waszczykowski saying it sounded like an April Fool's joke.

"I believe that the decision is against the Treaty of the EU and the Hungarian government cannot accept it," the Hungarian MEP concluded.

On Tuesday, the Hungarian supreme court ruled in favor of holding a referendum on the quota system to be held in September or early October.

000000
Popular comments
Of course it is against the EU treaty. Just because the xenophilic unelected puppets of the EU want all Europe to become a caliphate, it does not mean that the rest of us are brain dead.
Athanasios
4 May 2016, 19:56 GMT1
000000
The European funny farm is getting crazier by the day. And that by a bunch of incompetent unelected holiday goers living the rich live of Raleigh in Brussels. It is inconceivable to many of us that those unelected party goers in Brussels could be doing any worse.