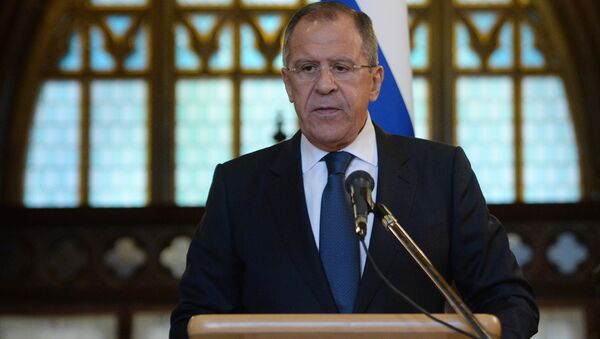 Russian Foreign Minister Sergei Lavrov said that Russia was concerned about Turkey's shelling of the Syrian territory and the increasing calls for a ground operation in the country.

MOSCOW (Sputnik) — Any calls for launching a ground operation in war-torn Syria should be stopped, Russian Foreign Minister Sergei Lavrov said on Tuesday.

​The top diplomat said that Russia was concerned about Turkey's shelling of the Syrian territory and the increasing calls for a ground operation in the country.

#SYRIA Report of the Russian Centre for reconciliation of opposing sides (May 2, 2016) https://t.co/Ufy8ASzUre pic.twitter.com/pVZAixDpHl

​"We strongly believe that such calls are made by those who are not interested in the real political settlement, who rely on a military solution. We are convinced it will lead to a catastrophic situation, and such appeals should be stopped," Lavrov said following a meeting with UN Special Envoy for Syria Staffan de Mistura.

World
Lavrov: Russia, US Cooperating in Syria Despite Washington's Statements
For months, Turkey's southern districts have been subjected to shelling from the territories in Syria occupied by the Islamic State (IS) militants. Turkish troops deployed in the vicinity of the country's border with Syria retaliate by shelling the targets of the IS, a group which is outlawed in a number of countries, including Russia.

Saudi Defense Ministry adviser Ahmed Asiri told Sputnik in March that a possible ground operation in Syria had been discussed at a political level but military discussions were yet to start.