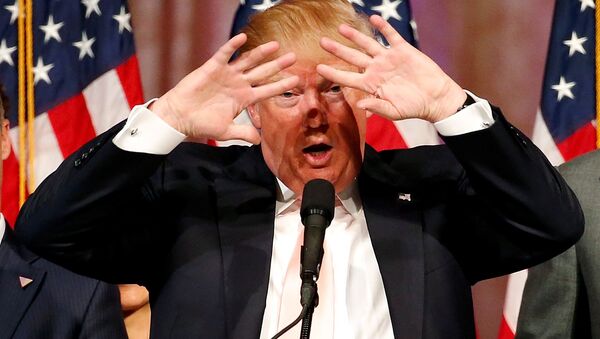 Alexander Mercouris
London-based lawyer
All materials
Donald Trump’s recent speech on foreign policy has been roundly condemned by the US foreign establishment.

It has also been ridiculed as confusing and contradictory.

Thank you to all for the wonderful reviews of my foreign policy speech. I will soon be speaking in great detail on numerous other topics!

​This is a misrepresentation. Whilst Trump did not provide a detailed programme — to have done so in the middle of an election would have been unwise — his underlying message is clear enough.

The economy is bad and getting worse-almost ZERO growth this quarter. Nobody can beat me on the economy (and jobs). MAKE AMERICA GREAT AGAIN

To understand what that would mean in practice consider the contrast between what the US public wants and what the US has actually done under successive US administrations.

Whereas the US public since 9/11 has been overwhelmingly focused on jihadi terrorism as the greatest threat to the US, the US foreign policy establishment is only minimally interested in that question. Its priority is to secure US world hegemony by reshaping the world geopolitical map.

Thank you! WE will MAKE AMERICA GREAT AGAIN! https://t.co/aKxoD24IN9

​First and foremost that has meant confronting the two great powers — Russia and China — the US sees as the primary obstacle to its hegemony.

It has also meant a series of geopolitical adventures in Yugoslavia, Afghanistan, Iraq, Libya and Syria, a protracted confrontation with Iran, and head on collisions with Russia and China in Ukraine and the South China Sea.

The US public for its part has shown little or no enthusiasm for any of these projects.

By contrast the US foreign policy establishment has show little enthusiasm for confronting the Islamic State/Daesh.

Elsewhere — in Chechnya, Libya and Syria — the US has willingly collaborated with jihadi terrorists to achieve its geopolitical goals.

Trump threatens to turn all this on its head.

In place of confrontation with Russia and China he says he wants to cut deals with them calculating — rightly — that they are no threat to the US.

In place of collaboration with jihadi terrorism he promises a single-minded focus on its destruction.

Other pillars of current US foreign policy are also challenged.

This is Why Voting for Hillary is Not the Best Idea
Whereas the ideologues currently in charge of US foreign policy treat US allies as ideological soulmates in a quest to spread "Western values" (ie. US hegemony), Trump sees the US's relationship with its allies as transactional: the US will help them if they help themselves, with no sense of this being part of some ideological common cause.

Having dumped the ideology and the foreign policy that goes with it Trump, promises to focus on sorting out the US's internal problems, which is where the US public's priorities also lie.

He is not coherent. He continues to talk of Iran as an enemy — ignoring the fact that it is as much a potential partner of the US as Russia and China are.

Some of the things Trump says — for example his talk of embracing torture — are frankly disturbing.

Trump Predicts 'Great Relationship' With Russia, Putin if Elected
It remains to be seen whether a President Trump if elected would be either willing or able — as he promises — to change the entire foreign policy direction of the US.

The fact however remains that Trump has challenged the ideological foundations upon which US foreign policy is built whilst offering an alternative that has elicited a powerful response from the US public.

That is why the US political establishment is so alarmed by him.