A Grim Anniversary Between Two Holidays: Remembering the Odessa Massacre 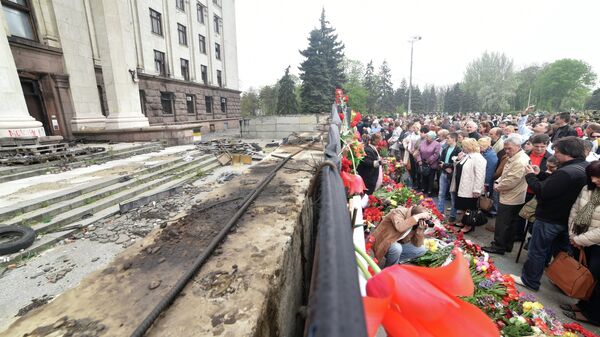 May 2 marks the second anniversary of the politically incited massacre in the Ukranian port city of Odessa, which left at least 48 people dead.

MOSCOW (Sputnik) — May 2 marks the second anniversary of the politically inspired massacre in the port city of Odessa that resulted in the deaths of 48 people.

The tragedy happened at the height of the political crisis in Ukraine which erupted in 2013.

On November 21, 2013, Ukraine suspended its consideration of the EU Association Agreement to enhance national security and study the required package of measures in more detail. The Ukrainian cabinet of ministers explained this decision by the need to develop economic relations with Russia and other CIS (Commonwealth of Independent States) countries.

Human Rights Violations Widespread in Ukraine Despite Minsk Agreements - UN
The first appeals for protest appeared in the social media immediately after this decision was announced. On the evening of the same day about 2,000 people gathered on Independence Square (in Ukrainian "Maidan Nezalezhnosti") in downtown Kiev.

After the initial demonstrations had been dispersed on November 30, large-scale street protests resumed in Kiev on February 18, the day of the Verkhovna Rada session, during which the opposition demanded a return to the parliamentary presidential form of government by restoring the 2004 Constitution. The aggressive crowd tried to approach the Rada’s building. Radicals broke into buildings in central Kiev, burned tires and threw stones and Molotov cocktails at the police. According to police reports, the radicals used firearms for the first time that day.

On February 21, 2014, Ukrainian President Viktor Yanukovych announced his decision to initiate early presidential elections and return to the 2004 Constitution with the redistribution of powers in favor of the parliamentary republic. He also urged the nation to start forming a government of national trust.

Kiev Authorities Fail to Fully Investigate Odessa Massacre – German MP
According to official Ukrainian Healthcare Ministry data, made public in April 2014, 105 people died as a result of the unrest on February 20, 2014, including 94 people during clashes on Institutskaya Street in downtown Kiev.

On February 27, the Rada endorsed the so-called "government of popular trust" with Arseniy Yatsenyuk as Prime Minister.

A number of regions in the southwest of Ukraine did not recognize the legitimacy of the new Kiev authorities. Pro-federalization protests were then repeatedly raging in Ukraine's east.

On May 2, 2014 clashes broke out in Odessa on Kulikovo Field square between the pro-federalization activists on one side, and the fans of the Odesa and Kharkiv football teams on the other. The latter were joined by Maidan activists. The pro-Kiev radicals, supported by the armed forces of the Right Sector (far-right Ukrainian nationalist political party), had locked anti-government protesters inside Odesa's House of Trade Unions and set it on fire by hurling Molotov cocktails at the building.

Those who were trapped inside had little to no chance of extinguishing the blaze since the fire hoses in the building were out of order. Many of trapped people died while attempting to escape the inferno by jumping out of the windows. Others were simply shot by the radicals.

Maidan Madness: How the Virus Infected All of Ukraine (And Might Kill It)
According to official data, the tragic incident saw 48 people killed, including seven women and a minor and another 200 injured, including 49 policemen and 14 servicemen. The events were the bloodiest civil conflict in Odessa since the 1918 soldiers' riots during the 1918-20 civil war on the territories of the former Russian Empire.

On May 3, Russian Prime Minister Dmitry Medvedev offered condolences to the families of those who died in the city of Odessa. Russian Foreign Minister Sergei Lavrov urged OSCE to use its potential in a bid to persuade Kiev to cancel the military operation against the people in Ukraine's southeast.

On May 4, the coup-appointed Ukrainian Prime Minister Arseniy Yatsenyuk accused the country's Interior Ministry of failing to prevent the Odessa tragedy. He declared that all the senior police officials in Odessa were fired in connection with the tragedy.

The same day, Ukrainian police released 67 anti-government protesters who were detained in Odessa after almost a thousand of locals had picketed the police department building.

Flight of Fancy? Ukraine Considers Building 'Domestic' Multirole Fighter
The investigators offered several versions of the reasons behind the massacre, the main one being the "provocations by radical groups."

The Ukrainian Security Service initially assumed that the Russian intelligence services could have links to the Odesa massacre, but eventually the version was not confirmed by the investigators.

The hearings on the Odesa massacre case have began in November 2014, and were repeatedly postponed for various reasons.

The criminal case includes several episodes, particularly, on the crimes committed on the Greek square in Odessa, where first clashes happened, on the deaths of people in Trade Unions House, as well negligence by police, law enforcement and firemen.

Only the first episode is being considered by the court. Among the suspects are 23 people with 13 people on the wanted list. The list of the suspects includes Russian, Ukrainian and Belorussian nationals.

Suspects' lawyers were voicing the incompetence of the investigators, as well as the "fabricated" nature of the charges.

Six Months After Odesa Massacre: Facts and Details
The investigation into the Trade Unions House's massacre is still underway.

The case over the local police negligence is being hampered by the fact that the main suspect, former deputy head of the Odesa Police Dmitry Fuchedzhi, is hiding from the investigation. According to the Interior Ministry data, he is currently residing in Transnistria, the fact that is denied by the local authorities.

The case against firemen, who had allegedly arrived to the scene too late, has not been closed, either.

Several non-governmental organizations in Odesa are also conducting their own investigation into the tragedy.

According to the November 2015 report by EU Council advisory group on the May 2 massacre in Odessa, the domestic investigation by Kiev did not meet the requirements of the European Convention on Human Rights (ECHR), in particular, the investigation lacked independence and had shortcomings, which undermined the ability of the Ukrainian authorities to bring the perpetrators to justice.

The United Nations Monitoring Mission for Human Rights also expressed concern by the lack of progress in the investigation.