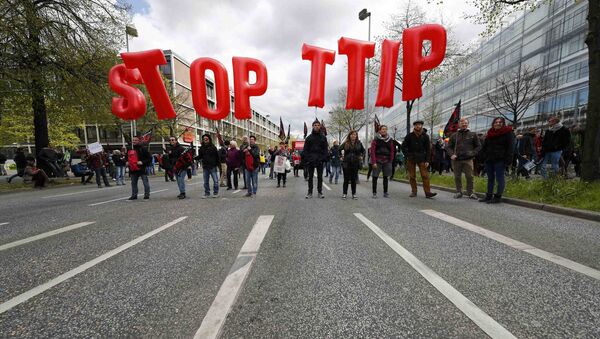 The Obama administration has threatened to block all European car exports if they do not accept America’s genetically-modified and hormone-enhanced produce.

On Sunday, German newspaper Süddeutsche Zeitung claimed that 240 pages of text from the secret transatlantic trade deal (TTIP) obtained by Greenpeace show the US to be blackmailing the EU to force through the trade deal, despite European objections.

Specifically, the United States threatened to block European car exports, in order to force the European Union to buy genetically engineered fruits and vegetables from the US – a move that opponents to the deal point out will compromise consumer health and negatively affect Europe’s agricultural industry.

Greenpeace announced that it would release the smuggled text of the Transatlantic Trade and Investment Partnership (TTIP) on Monday, undermining unusual efforts by the EU and US to keep the details secret.

The authenticity of the documents has been confirmed by German DPA news agency sources. The documents demonstrate that the White House sought to pressure the EU to replace its precautionary consumer safety principle with the US approach of permitting food products to be sold until risks are proven.

What are the Safety Concerns Associated With the Consumption of Genetically Modified Crops?

The impact of genetically engineered foods, often associated with US agricultural multinationals including Monsanto, remain unknown in the long term, as these products are relatively recent. Often criticized, genetically-engineered produce allows for a greater yield and reduced product spoilage, as well as pest resistance, leading to lower prices at the store and some hope of alleviating world hunger.

Nonetheless, after the release of these products the US witnessed a spike in autoimmune diseases, and complaints of wheat sensitivity, or Celiac disease. Medium-term tests show no association between consumption of genetically engineered products and these ailments, leading the concerns to be dismissed as a fad among hypochondriacs.

More concerning, however, has been the large-scale die-off of US bee colonies that serve the vital natural function for pollinating crops. It remains to be seen whether the recent die-offs are related to genetically modified crops or to the potent glyphosate-based pesticides, including Monsanto’s Round-Up, that are routinely used on these crops.

Finally, Monsanto’s patenting of genetically-modified seeds has led to their litigation and seizure of small farms for intellectual property theft when natural cross-pollination led non-genetically modified crops to bear strains that included elements of the genetically modified 'Round-Up Ready' seeds.

Will the TTIP be Expedited in Spite of Growing Public Dissent?

During the 2016 US presidential cycle, Republicans and Democrats have come together to decry trade deals, citing a litany of economic and environmental concerns. Likely Republican nominee Donald Trump frequently cites NAFTA and CAFTA as examples that trade deals expand the US trade imbalance and destroy the middle class. Democratic insurgent Bernie Sanders similarly critiques international trade deals but also includes concerns about worker’s wages and rights as well as environmental degradation.

The odds-on favorite to become the next US President, Hillary Clinton, has long supported global trade deals like NAFTA and CAFTA, passed under her husband’s administration in the 1990s. She lobbied for the Panama trade deal as Secretary of State, and referred to the Transpacific Partnership (TPP) trade deal as the “gold standard” over 45 times. Facing swelling frustration among younger and working class voters, Secretary Clinton now vows to oppose TPP and presumably TTIP.

With corporate supported trade agreements growing in unpopularity, the Obama administration is pushing ever more aggressively to advance the TTIP and TPP trade agreements prior to his departure in January 2017. The TPP trade agreement is expected to be passed without the full and proper consent of Congress during the post-election 'lame-duck' session of Congress. Similarly, it seems the White House seeks to prepare the TTIP for an expedited backdoor passage this year.

On Friday in New York, the lead US and EU negotiators – US Trade Representative Daniel Mullaney and the European Commission’s Ignacio Garcia Bercera – said they planned to reach a deal before Obama leaves office in January apparently out of awareness that free trade arrangements have become politically toxic.

Will the Obama administration’s lasting legacy be one of advancing a worldwide corporatist deregulatory framework against the will of the voting public in the United States and worldwide, by blackmailing allies into acquiescence? That appears to be the plan.